The Aegean coast of Turkey stretches from the North near Istanbul to the Marmaris peninsula. The region has a variety of holiday resorts, beaches, things to do and places to go. One of the highlights is the ancient ruins of Ephesus which at the height of it's existence was the second largest city of Rome. Camel wrestling is a favourite past time and tradition while the gorgeous, sandy beaches of Izmir, Bodrum, Kusadasi and the Datca peninsula will suit those who are looking for beach holidays.I also happen to be biased because it is where I live in Turkey.

Ah, to see the Ephesus ancient city ruins is to see one of the world's most significant historical sites. The colourful timeline of Turkey's history means the country is awash with historical sites dating from many civilizations. Out of all them, Ephesus is probably the most well-known, attracting thousands of visitors every day. Ephesus ancient city is to Turkey what the … END_OF_DOCUMENT_TOKEN_TO_BE_REPLACED

Pamukkale in Turkey is a top visited attraction and a sight to wow at. Pamukkale in the Denizli region, a UNESCO World Heritage Site, is nicknamed "Cotton Castle" because of solidified white calcium thermal pools that cascade down the side of a hill. Sitting inland within an agricultural province, on my 2002 visit to Pamukkale and Hierapolis ancient city, I didn't fully absorb … END_OF_DOCUMENT_TOKEN_TO_BE_REPLACED

I’d drove past the sign for Magnesia ancient city ruins many times. Hardly talked about or featured in guidebooks, I figured there was not much to see, yet curiosity still made me want to visit. So last month, our hobby photography group piled into the cars and made our way there. Sitting in the Aydin region of Aegean Turkey, it was just an hour’s drive away from my home, and … END_OF_DOCUMENT_TOKEN_TO_BE_REPLACED 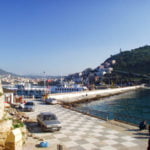 I have been rather critical of Kusadasi in the past. Yet following developments in the town; I’m warming up to it and now highly admired it for the famous international reputation it has built up. It is also extremely hard to ignore the fact that there are plently of unique things to do in Kusadasi. Indeed, as a major cruising port, cruises from around the world dock in yearly … END_OF_DOCUMENT_TOKEN_TO_BE_REPLACED

Sitting by Bafa Lake eating breakfast, always makes me feels creatively bohemian. Even better, is that it is a traditional Turkish breakfast, and not my native English fry up that cures my hangovers. In my mind, the rustic lakeside settings, fresh organic ingredients, and the ideal summer weather takes me away from the standard 9 to 5 lifestyle. I love saying to my friends “Oh … END_OF_DOCUMENT_TOKEN_TO_BE_REPLACED