Pamukkale in Turkey is a top visited attraction and a sight to wow at. Pamukkale in the Denizli region, a UNESCO World Heritage Site, is nicknamed “Cotton Castle” because of solidified white calcium thermal pools that cascade down the side of a hill. Sitting inland within an agricultural province, on my 2002 visit to Pamukkale and Hierapolis ancient city, I didn’t fully absorb the significance of the natural phenomenon and didn’t take any photographs. Over the years, my memories became hazy. However, in June, I returned.

About Pamukkale in Turkey

Most tourists travel to the Pamukkale site on a day trip from surrounding holiday resorts. Others pass-through for the night on their way to other places. I chose the latter to break up a long bus trip from Cappadocia. After getting a connecting shuttle bus from Denizli, I booked into a modern hotel on the outskirts since the closer the hotel is to the thermal pools, the more expensive it is.

Walking around Pamukkale village is an exciting and comical insight into a community desperate to make money from everyone passing through. Tradition shines through with local women wearing village clothing, herds of roosters roaming the streets and rusty farmyard equipment sitting in backyards. Every so often, an old Cortina car whizzed by, followed by the latest model of Ford or Opal. This reflects Turkey’s ad-hoc tendency to combine modern with the old. 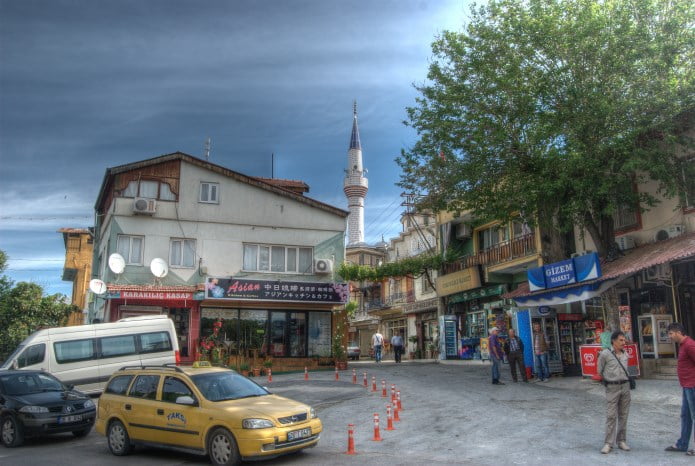 Larger than life and brash ticket touts, selling guided tours, and paragliding experiences also stood nearby a popular Asian restaurant. Had it been my first time in Turkey, I would have bought something because of the overwhelming hard-core sales patter, but anyway, I declined on this occasion. Despite the mishmash of old and new and overbearing ticket touts, Pamukkale village is charming, and as a single female, I felt safe. I was also pleased I stayed overnight to explore more.

Things to do at Pamukkale and Hierapolis

Looking at the map, I knew I couldn’t walk around everywhere in Hierapolis, whose origins date from the 2nd century BC. The name meaning “sacred city” reflected sprawling masses of temples, but most ruins date from the Roman period and spread out over a large area. In truth, anyway, the large theatre reached by a strenuous hike up a small hill was the only structure I wanted to see. Walking around in the mid-day heat often has that effect. 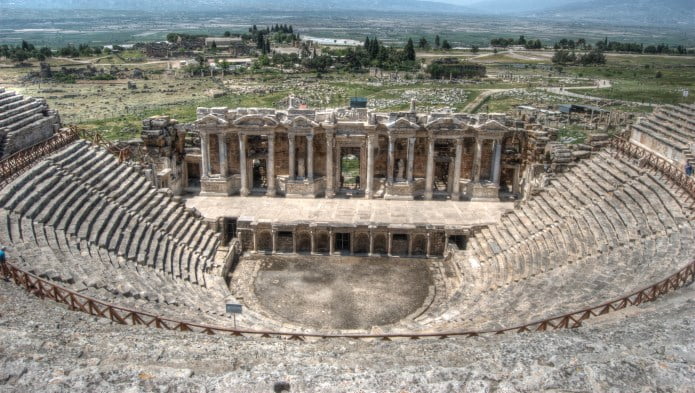 I walked in via the back entrance and, from there, sat on the top step for roughly 20 minutes. A barrier blocked off the impressive front façade but behind was a stunning landscape view far into the distance. Truthfully, I think this ancient theatre is better than the larger one seen at Ephesus, but many would disagree with me. Other structures to see from the Hierapolis include the Byzantine gates, Necropolis, and Apollo temple, but I was eager to see the highlight; Pamukkale thermal pools.

Everything seemed vastly different from when I visited Pamukkale 13 years earlier, but something else caught my eye even more. There were more dried up travertines on the terrace than water-filled ones. Three sections spread out on the landscape in front of me. The middle one was open, packed with bathers swimming and paddling in milky white water that averages 33 degrees. The rock leading up to the pools was rusty-brown. Every so often, the Turkish security guard blew their whistle when someone stepped on with shoes on. 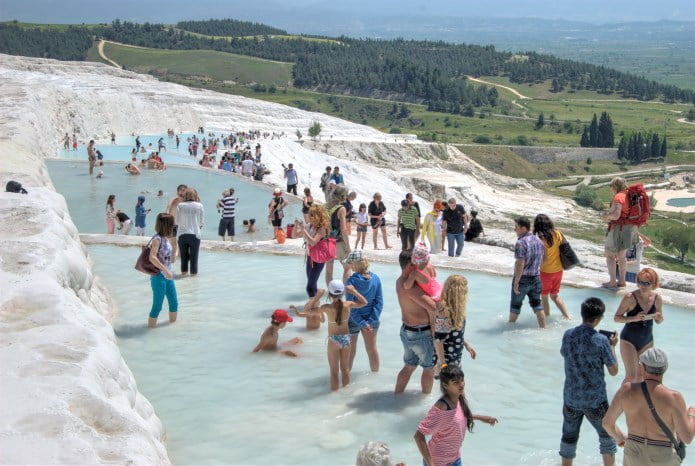 I overheard someone else ask security about the dried-up thermal pools, and the reply was that they shut them for cleaning. Somehow that didn’t sit right with me. Pamukkale is a natural landmark of the world, made from calcium carbonate deposits, which has existed for thousands of years.Romans used Pamukkale as a spring spa centre because the origin of the water is hot springs. Since when did Mother Nature need our help to preserve the earth, unless we have damaged it in the first place! Rumours of the demise of cotton Pamukkale have existed for years.

Turkish hotels backing the terrace pools were polluting them at one point, but they have since shut down. At another period, bathing in the water was forbidden.Pamukkale and Hierapolis receive millions of visitors annually who pay entrance tickets, museum tickets, and to enter Cleopatra’s pool. Add to this the revenues generated by souvenir shops and onsite restaurants, and that is a humongous amount of money passing through Pamukkale.

So in my eyes, what the Turkish security guard was saying was “Thousands of tourists tramping through Pamukkale every day disrupt the ecological balance, but we generate so much income, we need to keep it open.” While the travertine at Pamukkale might not disintegrate during our lifetime, I question whether future generations will see this marvel of Turkey.

After seeing white Pamukkale, I headed to Cleopatra’s pool for the restaurants and toilet. An entrance sign boasting of the water’s healing qualities said the water relieves symptoms of many ailments, including teenage acne, high blood pressure and varicose veins. The cynic in me wondered if it was a gimmick to justify the high cost of swimming in the main travertine pool, which at the bottom contains fallen columns from the great Roman city of Hierapolis. 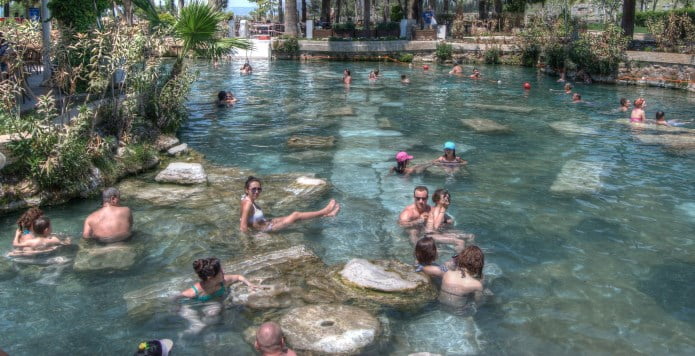 Regardless I wasn’t paying a considerable amount of money. There is also something seriously wrong with an establishment boasting about super-healing water covering ancient ruins, playing the f***** Macarena dance song from 2011 at loud volume. The ambience was ruined! Despite being one of Turkey’s most beautiful landmarks, Pamukkale has firmly been stamped, caged, and boxed by the seal of tourism that can make or break a destination. Tutting loudly to myself, I left and headed to the onsite museum.

Situated in 3 rooms and within the gardens, the Pamukkale museum displays artefacts from Hierapolis ancient ruins and other excavated places like Laodicea and Aphrodisias. The best of them all was the sarcophagus room. Unfortunately, only me and four other people were touring the museum, whereas Cleopatra’s pool was packed. But not everyone enjoys history, a fact I remind myself of every day. 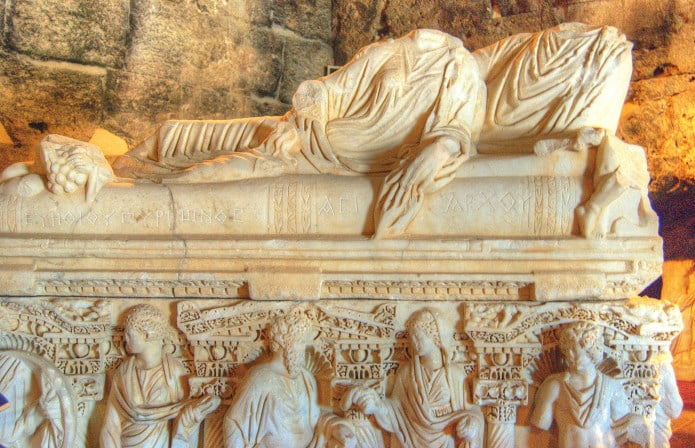 Despite being overtaken by mass tourism, Pamukkale and Hierapolis is a must-visit while in Turkey, simply because it is a natural and striking beautiful landmark. People also take a hot air balloon trip during sunrise or paraglide over Pamukkale travertines at any time during the day. Rather than just passing through for the day, though, stay overnight to appreciate it much more.

Note: From Cappadocia, there was no direct bus to Pamukkale in Turkey. I got a bus to Denizli town and then caught the connecting transfer, shuttle bus. Additionally, many people after Pamukkale travel to Ephesus, another top visited attraction, and UNESCO World Heritage site.