Turks have a habit of naming places, with a direct translation that means something. For example, the bustling holiday resort of “Marmaris” means “hang the architect” in reference to an Ottoman sultan, Suleyman the magnificent who in 1522, ordered a new fortress to be built and was totally disgusted at the finished result.

Likewise, Altinkum means “golden sands” referring to the many miles of sandy beaches on the coastline. Not sure, where the golden comes into it, but I assume the name was given many years before dogs started shitting on the beaches and tourists used it as one gigantic ashtray!

Anyway, I digress. On the Aegean coastline, there is a rather stunning beach called Sevgi plaji, in the Davutlar area. It is popular with local Turks from neighbouring Kusadasi and Soke. The name translates to “love beach” and there is no denying, that it is beautiful, therefore ideal for two lovers to take a romantic walk, while declaring nauseating and undying love to each other.

I visited Sevgi Plaji for the first time last year, and it holds strong memories for me but not for the reasons you might think.

For me, Sevgi Plaji was the place when I truly realized that my seven year marriage was over.

That day, my ex-husband suggested we venture out and about. It was a wonderful idea. He had been working away for two years and during that time, something had changed. In what way, I was not sure, but I felt distance and unease with the man who had returned to share my bed every night.

Feeling extremely happy, because I thought a romantic day would rekindle the passion in our marriage, I then felt like someone had pushed me off a cliff. The ex was on the phone to his family. They were going to join us and we would head to Sevgi Plaji.

Now at this point, you should know that I was already in the bad books with his family because when my husband had announced his intention to work away, it was suggested that I live with his family in the nearby town of Soke.

Apparently I could learn how to cook dolma, clean like a Turkish woman, be persuaded to have many babies and in the process, totally destroy the shred of any social life that I had left.

I politely declined and instead toured the Southwest coast of Turkey, messed around on boats, watched the horse races in Izmir and went hiking in the Kackar mountains. According to Turkish society, this is disappointing behaviour for a married woman.

Anyway, my refusal to become a domestic goddess, had always led my Turkish family to think I was stupid. At family gatherings, I was not even allowed to make the salad and I am quite sure that any offer to boil the eggs for breakfast, would have resulted in a fainting fit that needed hospitalization.

Now a person can only put up with being treated like the village idiot for so long. Eventually they start to distance themselves from “said” people. Hence, in the two years that my husband was working away, I conveniently forgot to visit my mother-in-law. Time passes by quickly, what more can I say?

So despite knowing that my Turkish family, hated my guts, I hitched along and we arrived at Sevgi plaj.

We proceeded to empty the boot of what seemed like the entire contents of a kitchen. Then we found a small clearing in among trees, laid out the blanket and struck up a BBQ. 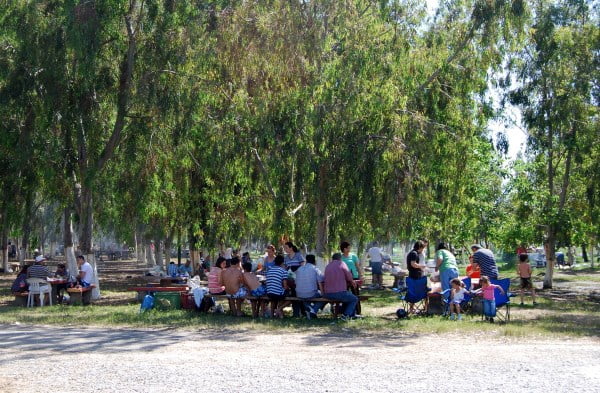 Now, where I come from, sparking up a BBQ next to trees and on grass is dangerous. I questioned this, and the response was raised eyebrows, sarcastic comments and lots of giggles. I shut my mouth, looked around for possible fire escape routes, and asked if I could help cut the tomatoes. “No” was the reply.

As we sat there eating BBQ chicken wings, peppers, onions and tomatoes, my brother in law remarked on my weight gain and said I was fat. Turks have no qualms about doing that. I however object, when the person saying it is a fat fucker themselves!

Had my brother-in-law been English, a rebuttal would have been easy but this is Turkey, so I duly shut my mouth and carried on eating.

As I sat there, tears started to well up and the realization hit me. I was in the wrong place with the wrong people. I was fed up of trying and drained of energy. I was fed up, that in the eyes of my Turkish husband; I would always come second to his family.

I hid my tears and never mentioned a word, but two days later, I threw my ex-husband out, while screaming degrading profanities about his manhood so all the neighbours can hear. After 13 years in the country, I knew the perfect way to hurt a Turkish man was to attack his pride and I strongly wanted retribution.

I am not entirely sure why, because on that day, it also felt like the shackles that were holding me down had finally been unlocked.

I think my visit to the beach with my ex and his family was meant to happen. It was the universe’s way of saying “Enough girl, you have strayed off your path too far”. In other ways, it is ironic that a defining moment of my life happened on the “Love beach”, but maybe the universe was just feeling bitchy that day.

Will I return to Love beach?

Probably, but not in the foreseeable future. While the emotional wounds are healing, the memories are still too raw.

Question for Readers: Is there is a place that you associate with good or bad memories?