There is a Turkish tea house in every town, city and village. It is part of all the establishments that go into making up a community. However  it is important not to confuse a Turkish tea house, with a tea garden, but how do you spot the difference?

Well, a Turkish tea house has no women in it. It is a male dominated environment that has been around for centuries .  Many years ago, I made the mistake of thinking that the unwritten rule of men only, would be relaxed on special occasions. I quickly learned different.

My friend Samantha and I, decided that we would like to show support to a male Turkish friend of ours, that had just opened a tea house. His name was Murat and while we thought the tea shop was a stupid idea, he wanted to go ahead with it. Our protests of how much profit you can  earn selling 20p cups of tea all day, fell on deaf ears.

On that morning, we pulled up on the scooter outside the shop,  having taken great care to ensure our clothing did not reveal too much. On pushing open the entrance door, the noise cut out like someone had just turned the television off.

Imagine  15 tables of old Turkish men, all starring in our direction. My heart started beating fast, as I suddenly realized that visiting a Turkish tea house was not such a great idea after all. I was relieved when I saw our friend, Murat come out of a back room, but it was obvious from his face, the relief was not mutual. . 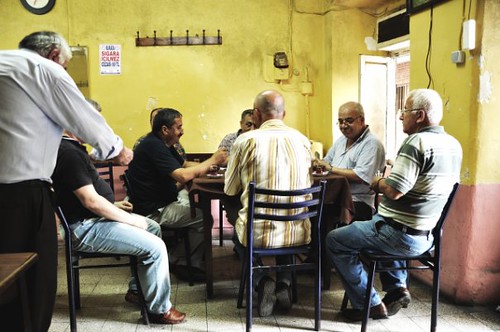 Murat  hurried us through, to a room at the back of the shop, while frantically  shaking his head and apologizing to every single man that was sat, with a face like they had just swallowed a fly.

We entered the back room, Murat shut the door and breathed for the first time since he had seen us at the door. Beads of sweat were running down his forehead and he managed to croak the quiet words of “what are you doing here?”

Cut a long story short, we got served two cups of tea, had to sit in the back room and then were frantically hurried out of the tea shop like we had the plague. I will think twice before I try to enter a tea house again, however now I can look back and laugh about the stupid ideas that used to come into my head.

Ok, western women who are not well traveled, may now  be screaming that this is the height of sexism. You could probably call it that,  as there is no good reason why women should not go in a tea shop. This is however  a different culture and the Turkish Tea house tradition has been around for years.

Am I bothered that I can not enter a Turkish tea house? No not at all,  there are other places like a Turkish tea garden or a cafe,  where I can sit down and drink tea. Leave the Turkish men to drink their tea and chat all day. It is their life, their tradition and their culture.  I don’t want to change it, I want to embrace it.