If there were ever a home with juicy untold secrets, it would have to be the 15th century BC Topkapi palace in Istanbul city. Covering nearly 600,000 square meters, the Ottoman Empire’s royal Palace was originally the brainchild of Sultan Mehmed, the conqueror. In Topkapi Palace, they courted their concubine slaves, harem fights for power took place, castrated eunuchs served their master, and sibling rivalry over the throne would cut some family members lives short.

Topkapi’s importance existed for nearly four hundred years until the Ottoman family moved into their new home, the Dolmabahce Palace. The 31st Sultan, Abdulmecid the 1st, was desperate to keep up with European royal families. So he decided the Topkapi palace lacked comfort and stylish architecture. Well, he did have a point.

Even today, Topkapi’s architectural style is not a patch on the likes of its western counterparts. But Topkapi palace in Istanbul reflects much more than bricks and mortar. The famous landmark portrays generations of a family whose influence changed world history and millions of lives.

About Topkapi Palace in Istanbul

The Ottoman Sultans lived in Topkapi Palace from the 15th to early 20th century. Construction took place after Sultan Mehmed the second’s conquest of Constantinople. Bear in mind; they were, at one point, a powerful family who ruled nearly half the world. They ruled their lands from Topkapi; hence thousands of people lived there, making more of a mini-city within Constantinople rather than a residence.

Ottoman sultans traditionally had more than one wife, and they lived with their children in the harem section. Ottoman sultans’ mothers also lived with them. Add to this their entourage, servants like the eunuchs, cooks, cleaners, and maids. Despite Topkapi’s massive size, you got little privacy unless you were the sultan if you lived there.

Is the Topkapi Palace in Europe or Asia?

The large Topkapi Palace Museum sits in European Istanbul, next to the famous Bosphorus straits and Golden Horn entrance. The Palace also overlooks the Marmara Sea and is within the main Sultanahmet area of the Fatih district, also known as Sarayburnu. Just a short walking distance from other significant landmarks like the Blue Mosque, Hagia Sophia and Basilica cistern, with limited time, you can see all these important sites within one day, but two days is better. 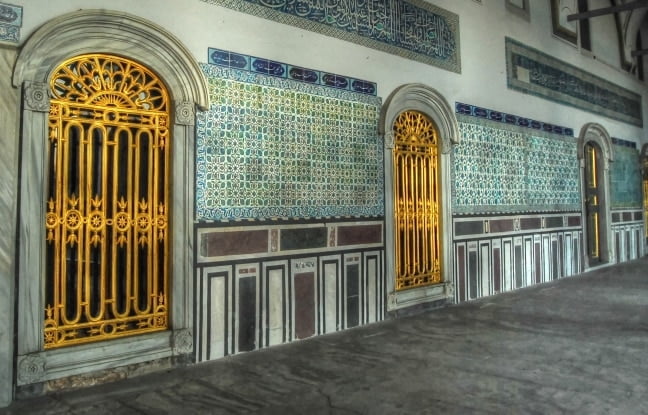 What to See in Topkapi Palace

A tour of Topkapi palace will take you around four courtyards, the separate garden areas, and past a kiosk adorned with beautiful tiles. Upon entering through the main gate, visitors arrive at the first courtyard. This housed the royal mint, Hagia Eirene church, bakery, wood house, and hospital. The Divan square, also known as the second courtyard, was where the sultan held a ceremony. The palace stables were also here. The third Enduran courtyard houses the Audience Hall, Treasury, Privy Room, and the Palace School. The fourth courtyard houses three pavilions, of which the Baghdad pavilion is the most admired. They sit alongside the Iftar Gazebo and wardrobe chamber.

Within the Topkapi treasury sits a 35 cm, 18th-century dagger with 50 diamonds and three deep green emerald stones, making it one of the world’s most precious pieces of jewellery. Unfortunately, as a gift for the late Iranian conqueror Nadih Shah, the dagger never arrived because someone assassinated the courier. Hence, it returned to its rightful home at the Palace and was made famous in 1964 when the Topkapi Dagger film was released, with a plotline of thieves attempting to steal it.

Within the imperial Topkapi museum, an 18-carat, 17-kilogram diamond sits on display. Set in silver, various stories about how the diamond came to Topkapi Palace exist, and archive records are not clear. Some say an angler found the stone on the Bosphorus shores and went to a jeweller. The jeweller ripped him off by giving him three spoons in return hence the name and sold the diamond to the 17th-century Sultan, Mehmet the hunter.

Within the privy residence chambers and third courtyard hall of Topkapi sits a room with a few Islamic holy relics. Ottoman sultans collected them from the 16th to 19th centuries. Important Arabic pieces include a staff of Moses, scrolls by John the Baptist, and the prophet Muhammad’s footprint, hair, sword, and bow. To preserve them, no one can touch them.

Add the 16th-century harem to your palace tour despite the extra cost. Connected by the courtyard and fountain garden, this educational experience disputes typical stereotypes. Harem women were schooled and educated to match the calibre of a woman only a sultan would court. Commands and order came from the Valide Sultan, the sultan’s mother, and competition to give the sultan service and eventually a son was fierce. To enter the Topkapi harem, go through the Cart Gate. The tour will take you past the Eunuch courtyard and their document archives, the harem baths, and the Queen mothers’ apartments. Various sections continue until the tour ends, finishing in the Palace’s third courtyard.

Do you remember the series about the Tudors that won a lot of awards? Well, the Turkish version, Magnificent Century, highlights the rule of Suleiman the Magnificent, the longest-ruling Ottoman sultan. This iconic series in Turkey, and many other places like Asia, was filmed at Topkapi Museum. If you cannot, visit for yourself, watch that series. Said to be 99% historically accurate, the series gives excellent insight into Ottoman families who lived at Topkapi palace in Istanbul.

Is it Worth Visiting the Topkapi Palace?

Without a doubt, visit the imperial Topkapi Palace Museum. The landmark building is to Turkey what the Palace of Versailles is to France and Buckingham Palace to the UK. To understand Turkey’s cultural heritage, you must learn about the Ottoman Empire, and the best way is to tour the Palace that was their administrative centre.The one mistake I made on both occasions was touring it independently.