There is no denying that visiting the Bodrum Peninsula of Turkey will introduce you to one of the most picturesque places in the country. Often reflected in travel brochures with images of sugar-cubed houses dotted over the green hillsides, it covers a large space on the Aegean coast of Turkey opposite the Greek Island of Kos.

As well as the town centre, many small surrounding coastal villages make up the large peninsula that has a strong reputation in the sailing and yachting industry, so much so, Turkish or international celebrities often jet in for a relaxing break.

My first visit was in 2002 while on a training course to be a holiday rep. At that time, I was more interested in trying to adapt to my new life overseas, than local landmarks or travel info.

Now, my reping days are far from over, and since I live just up the coastline, Bodrum is within easy travelling distance for me at all times, hence numerous visits over the years. The diversity of the region means it is impossible to sum it up in one sentence or pick the best place to stay because people’s preferences also vary. I could be cliché and call all of it, the ideal Aegean retreat but that is a whimsy description.

Instead, it would be better to describe each area of the peninsula and give some further reading resources into bloggers, writers and photographers that each portray their unique perception of the region. Before that, let’s get formalities out of the way and discuss the basics travel details.

If you are travelling from other areas within Turkey, the nationwide bus transport network is cheap and comfortable for long journeys that will eventually end in the town centre Otogar (bus) station. Otherwise, Bodrum airport has domestic and international terminals and from there, most places are within a short drive, possibly another reason why it is so popular.

My friend Eljay Dickens runs painting holidays on the Bodrum peninsula, and she has renovated a traditional old stone Greek cottage, that I will always use when visiting. It is a homely retreat, but for the typical hotels, booking.com often does a marvellous job of bringing up the best prices including budget B&BS or more luxurious hotels like the Five Star Kempinski. Before booking, check out this website for priceline discount codes on hotels.

The small dolmus buses are cheap and frequent, especially during summer, but having said that I think the Bodrum peninsula is a great place for car hire and one of the easiest places in Turkey to drive. Local car hire suppliers often come up with marvellous deals but ask for a diesel car because petrol is expensive. Otherwise, yellow-metered taxis can be called to your hotel or picked up from taxi ranks on the corners of most busy streets.

Restaurants and Eating Out

Any regular reader will spot the lack of restaurant reviews on here as it is something I’m loathed to do unless I return to the place time after time. I have recommended restaurants before, and they have then changed hands and with it, the food and service normally take a dive into the depths of a kitchen from hell. So for restaurant recommendations for each area of Bodrum, check out the Bodrum Peninsula Travel Guide instead.

Basic History of Bodrum: What You Need to Know

Bodrum was one of the first places in Turkey to embrace tourism and part of the credit can go to the fisherman of Halicarnus, otherwise known as Cevat Sakir Kabaagaçli, who was the inventor of Blue Voyage cruises. His exploration laid down the roots for the beginning of the Turkish Riviera of which Bodrum is a major hub.

Exiled to Bodrum in 1925, for his written work that disregarded the current political thoughts of that time, he fell in love with the area, hiring local fishermen to take him sailing and exploring. Documenting his travels, his friends from intellectual circles joined him on the cruises and a bohemian era was born. Eventually, the sponge diving villages of the Bodrum peninsula found themselves with a new source of income and most turned their trade to tourism or sailing.

For that reason, It is hard not to pay homage to the way Bodrum developed itself and most people while in the area hit the open sea, whether it is on a one-day trip departing from the harbours, or cabin or private charter on a traditional Turkish gulet boat. Some Blue Voyage companies also operate cruises that include the Greek Islands in the itinerary.

Areas of Bodrum Peninsula to Visit

Having been modernised more than once, Bodrum town centre has every facility and amenity you could want. Everything is on your doorstep. I have fond memories of a fantastic night at the marina restaurant but I never made it to Halicarnassus that is the most famous nightclub this side of Istanbul, because there were too many bars in between.

I didn’t enjoy bar street, which is one long strip of bars, mostly playing the latest western dance music because looking around at the other customers, I felt  old, but I did enjoy wandering the cobbled streets of the old town. If partying is your priority on holiday, then the town centre is where you should stay.

Top tourist attractions are the 15th century Saint Peters Castle sitting at the end of the harbour and the Underwater Museum of Archaeology displaying uncovered shipwrecks and their artefacts, including the famous Uluburun shipwreck dating from the Bronze Age. Discovered 6 miles off the coastline of Kas on the Mediterranean coast of Turkey, more than 22,000 dives were needed to bring it up piece by piece to the surface.

This small town boasts of a sandy beach, gorgeous sunsets, a new marina, one of the best weekly markets, the old town part, and harbour front restaurants serving delicious fish and seafood. The large stone windmill on the harbour front is the local landmark and possibly, thanks to the laidback vibes, Yalikavak is also a popular place for British expats.

This article details my first visit there but the town has changed drastically since then and now includes the Palmarina, which has elevated the town’s status in social circles. Catering for the millionaire yacht owners, it is all about money, luxury and the best upmarket brand names. Don’t let this deter you if you are a budget traveller, though, because the old part still caters for middle-stream tourism.

As the neighbouring resort of Yalikavak, and another contender for the best sunset view, Turgutreis is another favourite haunt of the Brits, hence, the restaurant images that are geared up for British favourites such as breakfast and Sunday dinner. For me, it is pretty much a carbon copy of Yalikavak, with its sandy beach, harbour front, and marina.

As one of the quieter places in Bodrum attracting windsurfers, I’ve visited twice; opting to stay overnight the last time and it is not something I would do again. The beach is long and sandy and it is a nice, quiet village yet for me, it lacked vibes and atmosphere.

It is as if the village just exists. Other than to see the beach or windsurf, there is no reason to go but on the outskirts, I enjoyed visiting Victorias Club, that is a horse ranch with Shetland ponies, its own restaurant, pool and sunbathing facilities.

Gumusluk: I Love You

Despite its small size, Gumusluk is one of my favourite places in Bodrum. Well known throughout the country for its Rabbit Island and seaside fish restaurants, it is not unheard of for rich Istanbulites to pay excessively for quality fish dishes and wine.

While the restaurants are pricey, their seaside position, cool summer evenings with fires on the beach are a favourite memory of mine. Limon Cafe set further back from the coastline was also an awesome place to drink, simply because it has amazing views of the coastline and countryside.

On the outskirts of Yalikavak town centre, I visited the old part of Gokcebel that really is laid back and only had one shop selling the basic items. As mentioned before, I stayed in the old stone cottage and because of this; it felt like I was living in the village, instead of holidaying there. Havva Hanim’s is a popular haunt with Turks at the weekends because of her traditional village breakfast consisting mostly of home-grown ingredients.

Why anyone would stay overnight here is beyond me but apparently there is a large timeshare complex nearby and some golf courses. Other than that, Turks head there in the summer evenings for the fish restaurants. It is a quiet  area with good restaurants but it completely lacks welcoming vibes and things to do. Scenic views are the most you will get here. 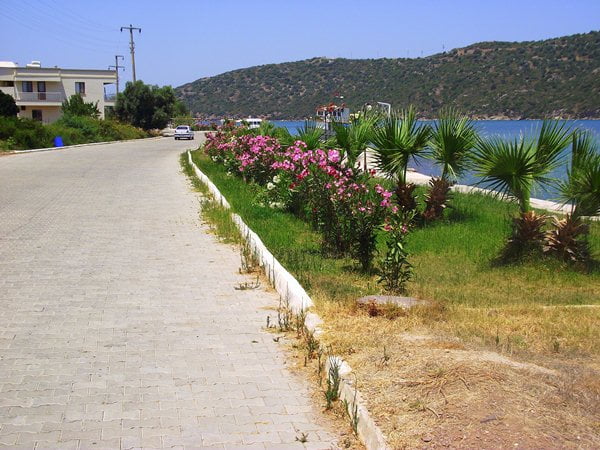 Other Places To Visit on the Bodrum Peninsula

Gumbet is one of the more popular holiday resorts that has a mixed reputation. Some say it is a vile place resembling little Britain while others like it. The small town of Torba always wins high reviews, as does Bitez. Golturkbuku is probably always going to be out of my budget since it is a rich man’s resort and this is reflected in prices of hotels. Ortakent and Gundogan are two other lesser-known places of Bodrum. These places are still on my bucket list, so for more info on these areas, head over to this travel Guide website instead.

My friend Eljay Dickens is the resident expert for the Gökçebel and Yalikavak region. She also runs rather awesome painting holidays of which I attended last year and had a fantastic time, even though I am a novice. Her website called Turkish Painting Holidays is here.

For a bit of nostalgia and reflection, Annie runs the Back to Bodrum Blog. In 1982, she lived in Bodrum before going back to the UK but in 2012, made the move to live here permanently. She says…

“Thirty years have passed and Bodrum has changed. There are plenty of very good blogs detailing the ex-pat journey through modern Turkey. The aim of this one is to catch sight of past Turkey through my experience of re-settling in modern Bodrum.”

For a comical read containing part fiction and part fact, check out Jack Scott’s books about expat life on the Bodrum Peninsula. Filled with hilarious tales of life in Turkey for foreigners, they are a good read whether you plan to come here or not.

Jay Artale is a local expat of Bodrum. She has traveled extensively throughout the region and written many travel guides about Bodrum. The holiday resorts, things to do, where to go, what to do, the best restaurants. You name it and it is in her book. Purchase it for Kindle from Amazon here.