“Believe me, my young friend, there is nothing- absolutely nothing- half so much worth doing as simply messing about in boats” Quote by The Water Rat from Wind In the Willows

Typically, my idea of messing around on boats has always been a relaxing pleasure cruise along the coastline. However, when I was faced with the opportunity to do something quite extraordinary and out of habit, I decided to sign up for sea kayaking with Bougainville Travel, who operate day and week-long sea kayaking tours in Turkey.

I was spending time with them looking behind the scenes at their adventure activities and fancied having a go at gliding effortlessly on water. Sea kayaking generally does not appear on mainstream lists of things to do while in Turkey.  The day was going to be a great introduction to something new. Something I had never thought about doing.

I soon learned though, that my pre-conceived ideas about sea kayaking were very wrong indeed.

“Although kayaking tends to draw a younger demographic, it is still a lifelong sport that anyone can get into. It’s a sport anyone can enjoy, because it’s not about strength, it’s about technique”. – quote by Katherine Carr

I should have read the above quote before signing up for the tour. While I did listen to the safety talk and instructions given out by our guide, I distinctly remember paying more attention to the overwhelming urge to jump in the kayak and head off.

The result of my mistake was that when I did get in the kayak,  for the first half hour I was paddling either in circles or in completely the opposite direction to the rest of the group!

Once I had managed to turn myself in the right direction, we headed out of the harbor at Ucagiz. Our first destination was Kekova sunken city, lying off a small island separated from the mainland hundreds of years ago during an earthquake.

The Bay of Kekova

Gaining Control of the Kayak

I tried my best, paddling hard and furious, but always lagging behind the rest of the group. A long distance from me, a speedboat raced past. The distance did nothing to calm the ripples in the water that came my way but I had paid no attention to the possibility that my kayak could turn over as I was still focusing my attention on trying to control it.

By the time we had reached Kekova sunken city, I had to admit that sadly this was one thing in life that I was not going to master with very little effort or concentration.   I tied up my sea kayak to the back of the safety boat that was following us along the course and joined the jolly captain on board who tried with great comical descriptions to tell me what I was doing wrong.

It was too late though and the feeling of failure had taken over.

I viewed the historical Kekova sunken city from a boat when others had the pleasure of sea kayaking over it. 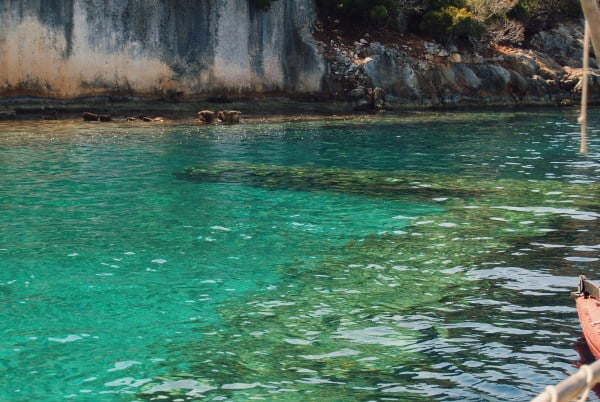 The Sunken City of Kekova

From Kekova, the next destination was the beautiful bay of Simena, an ancient Lycian village only accessible by boat.

A refreshment break revealed that others were beginning to flag but they were determined to stay the course.

The instructor, as expected was taking it all in his stride. After all, he completed the sea kayaking tour every day of the week throughout the summer. Sea kayaking is one of most popular tours of Bougainville Travel and it irked me that others were achieving something that I had failed at.

Taking it all in their stride!

The group consisted of experienced and first time kayakers who had mastered the art of sea kayaking. I was not to join in with their success and jubilation though, as on that day a personal challenge presented itself to me.

You see, I have always had great luck in life in that anything I do, I normally succeed the first time. I often find that I am in the right place at the right time and my mother still says to this day that “I could fall in s*** and still come up smelling of roses”.

I find it hard to remember things in life that I have failed at however, I had to realize that sea kayaking was going to be something that I will have to work at. It is not going to come to me naturally and has instead left me frustrated and with disbelief, that life dared to throw something at me that I could not do.

Mastering the Sport of Sea Kayaking

An overwhelming urge to sign up again, is with me every day. I think that instead of a group tour, one to one lessons with an instructor, even in a swimming pool would be a good starting point. The lessons would improve my techniques and co-ordination and eventually I will head back to Kas and complete that sea kayaking tour with ease and victory.

I am not ready to accept defeat.  Mastering the sport of sea kayaking has grabbed my attention and it has no inclination to let go. Sure, I will need to put in that extra effort but surely the results will be more pleasurable and greater.

If you want to experience sea kayaking in Turkey, Bougainville Travel  operate tailor made and organised sea kayaking tours on the south west coast. Many thanks to them for introducing me to  various adventure activities in Kas and the surrounding regions.

Readers Question : Have you been sea kayaking in Turkey or anywhere else in the world?