Antalya, the second most popular holiday destination in Turkey and a cosmopolitan hub for many nationalities, has a never-ending source of attractions and places to visit for tourists.  Including historical sites, natural landscapes of beauty, shopping opportunities, sailing expeditions and art fests, choosing what to do first is a headache in itself.

While most guidebooks recommend that you visit the old town and historical site of Aspendos, many other places are bigger and better if you can travel to the outskirts of the region. If time is limited book your hotel in Antalya city centre and visit the main attractions first but if you are on a repeat visit or staying longer than a few days, the following places could blow your mind!

Sitting near the beach resort of Kemer, the mountain itself is not impressive, although it was steeped in mythology and formerly called Olympos, home of the gods. Instead, it is the 15-minute cable car ride to the summit which proudly boasts of a 360 degree panoramic view of the Antalya coastline and Taurus mountain range.

The company running the project proudly have the slogan “From Sky to Sea” because at certain times of the year, you can ski down the mountain and then go swimming in the sea. The cable car returns down the mountain every hour but if you are a daredevil hampering after an adrenaline fix, sign up for a tandem paragliding experience as an alternative way to descend.

Another place steeped in mythology, for many centuries pirates and sailors believed the flames oozing out of rocks for 24 hours a day, were produced by the Chimaera creature that had the body of a lion, head of a goat and tail of a snake.

Called Yanartas in Turkish, scientists have proved that the natural phenomenon is nothing more than methane and other gases igniting when they combine with oxygen in the air. The best time to visit is after sunset but be prepared because the walk uphill is strenuous and you should pack a torch to easily navigate the poorly lit path. To be honest, after seeing the flames, I felt they have been hyped up by over-generous Internet reviews, but most other people seem to enjoy them.

Fairytale Stories in the Ruins of Olympos 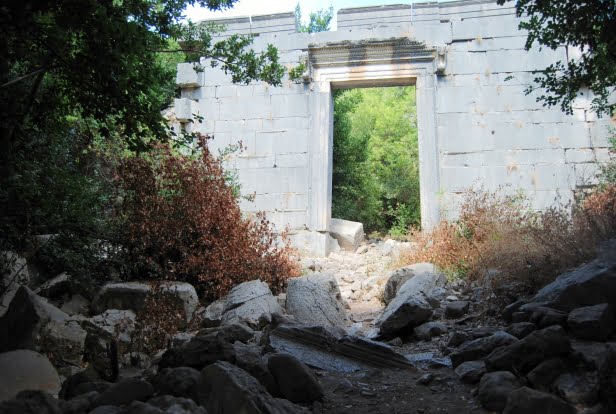 Sitting next to the rustic and hippy inspired village of the same name, the ruins of Olympos make you feel like you have stepped into a fairy-tale. Ancient churches, homes, and temples sit in their excavated state among a thick and dense forest, hence if it wasn’t for maps showing the way, you could easily get lost.

“The ship sailed into harbor and anchored to leave no more,
As there was no longer any hope from the wind or daylight,
After the light carried by the dawn had left Captain Eudemos,
There buried the ship with a life as short as a day, like a broken wave.”

If you can visit more places, head west to the agricultural town of Demre and the church of Saint Nicholas, otherwise known as Santa Claus. He was a real person, who was born in the Turkish town of Patara and became bishop of Demre (then called Myra.) Read the full article about my visit here, but in the meantime, this post is part of the #hipmunkcitylove project and we will publish more articles about travelling in Turkey soon so stay tuned.