Many tourists arrive in Turkey and head straight to the Sultanahmet attractions of Istanbul city. This area is the hub of Istanbul’s historical timeline and former capital of the Ottoman and Byzantine empires. There are plenty of things to do and places to see, within two days. So whether you book a hotel in the Sultanahmet district or travel there for the day, expect a marvellous insight into Istanbul’s most outstanding achievements. Majestic buildings dating back centuries blend in with today’s modern world but still maintain their historical importance.

As a UNESCO World Heritage area, Sultanahmet is Turkey’s and Istanbul’s most popular tourist attraction. The cool thing about all attractions from its Constantinople era is that they are within walking distance of each other. If you like independent travel, you don’t need a guide, but I suggest a detailed book about Istanbul instead if you don’t use one. Visiting the city attractions is more fun if you know their historical backgrounds’ facts, figures, and myths.

Guide to Sultanahmet Attractions in Istanbul

Also called the Sultanahmet Cami, this six-minaret mosque of Istanbul built-in 1616 amazes everyone. Suitably named because of blue tiles decorating the interior, the mosque is always open outside prayer sessions. The Blue Mosque is a stunning landmark in Istanbul city, but please remember that this is a place of worship, so obey the dress code and be quiet. The mosque sits in the heart of Sultanahmet square.

3: Attractions in the Arasta Bazaar

Sitting next to the Blue Mosque, this Turkish bazaar is quieter than Istanbul’s more famous Grand bazaar. Consisting of textiles, jewellery and carpet shops, and a small art gallery, the market is a lesser-visited attraction in Sultanahmet yet a great place to catch local vibes and understand the reading culture of Istanbul.

4: The Popular Topkapi Palace and the Harem

The first home of the Ottoman Empire’s Sultans, Topkapi is a treasure chest of antiques, including clothes, jewellery, and armour. Tour the kitchens, circumcision rooms, and prayer quarters, but the highlight of Topkapi is the harem. There is an extra fee to enter but worth it. Surrounded by the Bosphorus and Golden horn of Istanbul, overall, the architecture is from another world. Yet, a trip to Topkapi palace gives a marvellous insight into the world’s most misunderstood empire.

Located close to Topkapi Palace, this green landscape and gardens evoke romantic strolls or simply a break from city life. Visit during April to see thousands of colourful tulips planted for the annual Istanbul tulip festival. For a drink or food, visit the Turkish Kandil restaurant, although many locals prefer to drink tea there and eat elsewhere. Although few guidebooks mention this Sultanahmet area, it is perfect for relaxing, taking a tour or just unwinding from urban vibes.

A small entrance door leads down a flight of 52 stone stairs to the beautiful Basilica cistern site that used to supply the Topkapi palace with water and was also featured in the James Bond film, “From Russia with love.” The cistern stands out because of the famous heads of Medusa that sit at the back of the cistern. Otherwise, visiting the Basilica cistern of Istanbul is a travel pleasure to feed the fish and wander through the mysterious columns. (More about the cistern.) 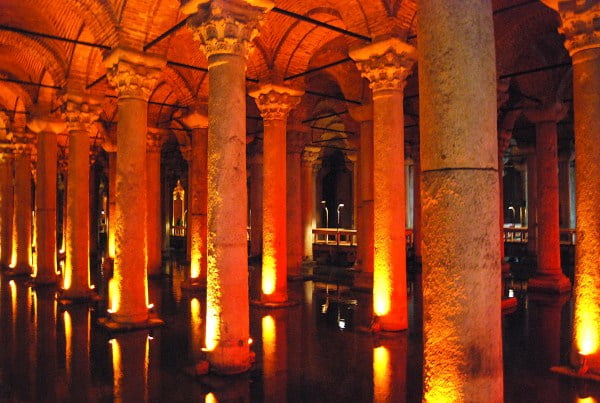 7: Enjoy the Historic Hippodrome of Istanbul

Sitting in Sultanahmet square, this historic attraction does not show its former glory as of the hub of sports and social gatherings during the Byzantine Empire. The hippodrome was also most famously the scene of the Nika riots in 532, in which roughly 30,000 people died and sits next to the Blue mosque, easily be seen from the side entrance.

These three museums within the same building have an awe-inspiring collection of ancient artefacts from various civilizations throughout history. Istanbul Archaeology Museums are some of the best museums globally, and history lovers easily spend hours exploring the exhibitions. The great news is that they are a short walk from Topkapi Palace.

9: Museum of Turkish and Islamic arts

10: An Old Fashioned Hamam in Sultanahmet

Mimar Sinan, the Ottoman empire’s most famous architect, built the Hagia Sophia Hürrem Sultan Bath in Istanbul in the 16th century at the request of Hürrem Sultan (Roxelana), the wife of Suleiman the Magnificent. Sitting between the Hagia Sophia and Blue mosque, the Turkish bath closed in 1910 and was later used to house convicts. In 2007 though, the hamam was lovely restored and reopened to the public as an iconic bathhouse of Istanbul.

Although not directly with the Sultanahmet district of Istanbul, the grand bazaar sitting nearby is usually tagged onto the end of a day’s tour. Sitting close by, this massive labyrinth of alleyways and shops dates from the Ottoman era, when vendors were grouped based on what they sold. This tradition continues today, and since the bazaar is an old building adds a nostalgic touch to your souvenir shopping. Read more about the Bazaar.

About the Istanbul E-Ticket Pass

Visitors who plan to explore many new and traditional attractions in Istanbul should look into the Istanbul e-ticket digital pass. A pass includes entrance to more than 40 different attractions, things to do, mosques, palaces, and more. Some also consist of a guided tour for places like the Blue Mosque and Hagia Sophia, which in the case of the Sultanahmet district, dramatically enhances your experience. Find out more about the Istanbul e-ticket pass here.

From Sultanahmet to Things to do in Taksim

From one sight to another, if you have time, left in Istanbul, head across to the Taksim area. Sultanahmet is the heart of old Istanbul, whereas Taksim and, more specifically, Istiklal Avenue is the heart of new Istanbul. One option is to go on a crazy shopping spree thanks to loads of shops, stalls, markets, and bazaars. The area is the best nightlife scene in Istanbul. Otherwise, numerous attractions, things to do and places of interest await you. While the Sultanahmet attractions in Istanbul are impressive, Taksim adds another dimension to your city trip.