Mount Tahtali was the first thing that I wanted to do while in Kemer. Reviews from the internet promised

During the months of Jan to April, it is said that you can go skiing on Mount Tahtali in the morning, descend to the resort of Kemer and swim in the Mediterranean Sea in the afternoon. I was not interested in the skiing or swimming part though, just the views and combating my fear of heights.

Mount Tahtali bases its location as Kemer – Antalya and if you are a hardened outdoor activity person, you can climb the mountain over a period of time. I am however, a hardened smoker whose working days involve sitting lazily for hours at a computer so I decided to take the easy route and jump in the cable car.

To get there from Antalya, there are numerous tour companies selling this as a daytime excursion or you can travel there independently by car. The cable car company itself, also operates a shuttle service from the main town of Kemer called “Sea and Sky“.

This transport which is included in the price of the ticket will drive you up tight and winding mountain roads until you reach the base camp. From there, they shove 80 people into a cable car, press the “go” button and it slowly makes it way to the summit. 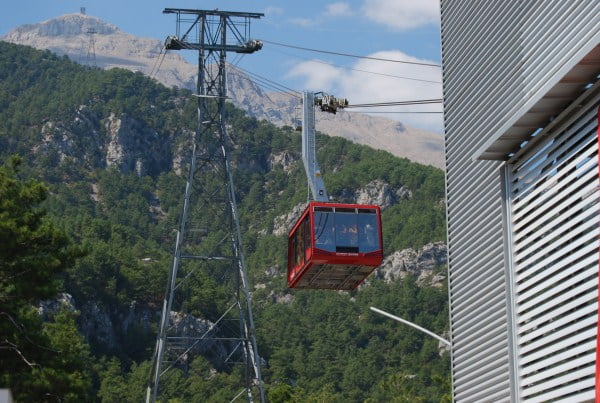 The reward when you have suffered ten minutes of elbows in your ribs, pathetic jokes about the cable car falling and nervous questions about safety standards in Turkey, is a complete view of the Beydaglari Mountains, the coast line of the Antalya region and of the beautiful Mediterranean Sea.

The view stopped me in my tracks and introduced me to the beauty of the Antalya region of Turkey. Tourists flock to Mount Tahtali  from all the surrounding resorts including Belek, Cirali and Olympos national park so be aware that at high season, there could be long queues.

At the summit are two reasonably priced restaurants, souvenir shops, a professional photographer and two static levels which meant I could capture outstanding photographs to remind me forever that I had made it to the top.

Coming back down from Mount Tahtali

For those of you who love adventure, think about paragliding off the top of the mountain and spend time soaring through the air before landing in the Kemer region at the foot of the mountain.

Don’t forget that the mountain also doubles up as a ski resort in the winter months so there is the option to ski down.  (Not a fact that many people know about Turkey, but there are numerous ski resorts in the country as well). I decided however to play it safe and take the cable car down.

Despite a fear of heights, the safety procedures that I was  eagerly watching gave me a sense of confidence and I had no regrets about making Mount Tahtali, one of my first destinations on my south western Turkey tour. If you happen to be anywhere in the Antalya region while in Turkey, don’t miss on this wonderful and amazing experience.

Cable cars and mountains. Are they also your idea of fun while on holiday?