It was an hour’s drive from Mardin to Midyat old city. I had wanted to stay the night but my travelling companion didn’t. He insisted there was nothing to do there, having driven through it three years earlier. He compared it with Mardin where Arabic architecture and narrow streets are the norm.

He also called me a nosy bitch when I explained to him that my planned visit was more about the people that lived there. You see, a few days before, I had learned about another ethnic group in Turkey.

In the past, the population of Midyat was mainly Assyrians who are practising Christians with roots that started in early Mesopotamia. Another term for them is Syriac (not to be confused with people from Syria). Only a small amount of them now live in Midyat and the neighboring Turabdin region, which is considered the heartland of the Assyrians. However, they still have nine churches in the old city and a monastery as well. According to research, languages spoken in Old Midyat include Turkish, Arabic, Kurdish, and Assyrian.

On a winding road leading out of the old town, stands the Mor Abrahom Hobel Monastery. It’s future caused concern for leaders of the Syriac orthodox religion after it was revealed that the empty monastery was being vandalized.

In complete amazement to me, it transpired they had decided to do something about it because when I arrived at the gate, I was greeted with a closure notice due to renovations. Locals had also told me that some churches in the old town were in full use, but the church I had wanted to look inside was closed because the preacher had died and was yet to be replaced. Just at that moment, the sound of church bells rang out over the town however I felt deflated because my quest to learn more about the Syriac people of Turkey, had suffered a setback.

The Children of Midyat

Before leaving for the south east, I had read many articles that said children in this area often follow tourists and beg them for money. The articles asked visitors to discourage children from begging by not giving them money.

So when a child came running up to us, I was all prepared to say no but the child shocked me. Had we been European and only spoke English, he probably would have asked us for money however he knew my hubby was Turkish and he started talking about the history of the town.

As we walked along the streets, he told us about various buildings and turned out to be a good guide but the skeptic in me just kept thinking of the scene in “Slumdog millionaire”. The child guide in that film was showing American tourists the Taj Mahal and had made up complete lies about its history and I wondered if the same had happened to us.

The child assured us that he was telling the truth. With friends, they learned everything about Midyat from school and the Internet because when Turks visit in the summer time, they can make pocket money for themselves. Exactly the same thing had happened in another village so we went against the advice of various publications and gave this child two Turkish lira. He did not beg us for money and instead was prepared to work for it.

The Culture House of Midyat

Thanks to our young and enthusiastic guide, we learned about the culture house. Many Turkish soap operas are filmed here and it was the nearest I would probably ever get to looking inside one of the houses. 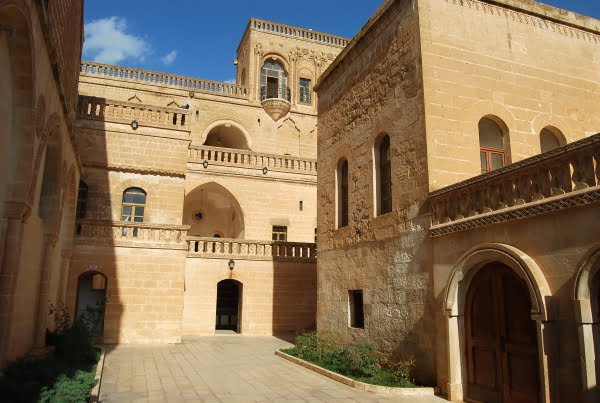 The house had been restored and a few rooms were traditionally furnished as well.

From the roof of the Culture house, I looked out over Old Midyat. I spotted two mosque minarets but the Christian cross and church bells dominated the skyline. I looked down on rooftops of neighboring buildings and saw blue, metal frames called Tahts. In the summer time, families take their mattress up to the blue frames and sleep there. How wonderful to spend the night under the stars. If not in use as a bed, it can also become a seating area.

I left Midyat later that day. While I had fully explored the town, I am still intrigued by the Assyrian people. I continue to research and learn about them from the Internet.

I have always said Turkey is diverse but learning about yet, another minority ethnic group makes me realize that I never really understood the extent of diversity in this large country.

The People of Midyat – see readers submissions at the bottom

Academic Research on the traditional houses of Midyat

All about Turabdin – The homeland of Assyrian People