Many people have a pre-conceived idea of Turkey before they come here. I will admit that I did and it was not until I  had visited Turkey that I fell in love with it. Every year that I stay here,  there are more and more interesting facts about Turkey that I learn and some of them are quite astonishing 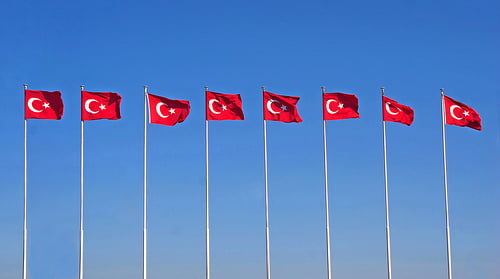 1 – Tulips originated from Turkey and not Holland. They were taken to Holland from Turkey in the 16th Century. To see evidence of this, have a look at Islamic art that was made before the 16th century. If  purchasing a traditional Turkish carpet then you will also find tulips in many patterns.

2 – St Nicolas otherwise known as Santa Claus originated from Turkey. At the time he was around, the area on the Southern Coast of Turkey was actually Greek. Out of all the facts about Turkey, this one surprises people the most.

3 – The patron Saint of England, otherwise known as St George also originated from Turkey. He was born in an area known as Cappadocia and later lived in Palestine. He was a Roman solider however objected to the persecution of Christians by the Romans.

4 – Noah’s ark is said to have landed on Mount Ararat and that is in Turkey. Many  archaeologists and scientists make their way to this mountain to try to discover remains of the ark.

5 – Istanbul is the only city in the world based on two continents. The largest part is in Asia but there is a small part in Europe. The two parts are divided by the Bosporus straight which is 20 miles long.

6 – The oldest church  built by man is located in Antakya and is called St Peters Church. Today the church is a museum, however it is still possible to hold services with special permission.

7 – The country is in fact known as The Republic of Turkey and it was not formed until 1923, previous to that it had been part of the Ottoman Empire. The Ottoman Empire lost in the first world war and Turkey was destined to be separated between the winning sides. Citizens fought a long battle and won.

8 – It is interesting to know that Turkey is also classed as being one of the few countries in the world that is self-sufficient. If all trade with other countries was to suddenly be cut, people would still be able to drink and eat most varieties of food as well as have access to fuel and energy.

9 – My last interesting fact about Turkey is the Virgin Mary. In the late 1950’s a nun was having dreams about the last resting place of the virgin Mary. She directed archaeologists to a house high up in the mountains of Selcuk.

The archaeologists discovered a house just like the nun said they would. The late pope went to visit the house and verified it as the last resting place of the Virgin Mary.

Today it is a well-known tourist attraction and place of worship used by monks and nuns to hold Christian services. If you visit the Virgin Mary’s house then be sure to drink water from the wishing well, and enter the church to light a candle.

Readers – do you have any interesting facts about Turkey that we can add to the list?