“The city of museums” is a fitting description for the South Eastern, bustling hub of Gaziantep. There are endless amounts of informative exhibitions on every topic but if I were to recommend any particular museum,, I would tell people to head to the exhibition in Gaziantep castle, then onto Gaziantep War Museum. Both concentrate mainly on the same subject, the role of Gaziantep during the Turkish war of independence and more specifically the siege of Antep that lasted from 1920 to 1921.

You may wonder why the city likes to feature heavily on their role in a war that happened more than 80 years ago. The answer is simply because the siege of Antep nearly wiped out the total population.

The Siege of Antep

Previous rulers of the region were the Ottoman Empire; however, they were on the losing side of World War 1. The winning allied forces including the English and French, decided to split the lands of the former Ottoman Empire between themselves.

The English unsuccessfully ruled Antep city for a brief period in 1919 before withdrawing to allow French forces to invade. One of the first acts of the French was to cut off all roads bringing in food supplies.

Most people who are starving and ill whilst facing invasion would be tempted to give up and accept their allocated space in the graveyard. Yet the citizens were determined that if they were going to die, it would be fighting and no one was exempt from the call to arms. With empty stomachs and growling hunger pains, women and child fought alongside the men, against invading French forces.

Children collected used bullets to melt down while the menfolk invented a simple homemade bomb, by constructing together two frying pans and women assisted in any way they could, either tending to the injured, fighting or building weapons alongside the men.

Over 6,000 adults and children died in the space of a year but the citizens were successful, mainly because they were steadfast in their decision to defend. As one citizen called, Sahin Bey said, “The only way the French will enter this city is over my body”

The role of the citizens in defending their strategic position heavily influenced the Turkish war of independence and leaders changed the name of the city. Antep was the old name and the word Gazi was added to the beginning, meaning war hero.

‘Every Turkish city, every town and the smallest Turkish village can accept the people of  Gaziantep as examples of heroism.’

Set in an old Ottoman house, visitors tour around 12 rooms containing artefacts from the siege of Antep. The rooms also feature heavily on the lives of certain people that fought and died, therefore becoming martyrs in the eyes of future generations. Pictures of fathers and sons with guns adorn the walls and written accounts of the invasion as well as weapons are on display in glass cabinets. 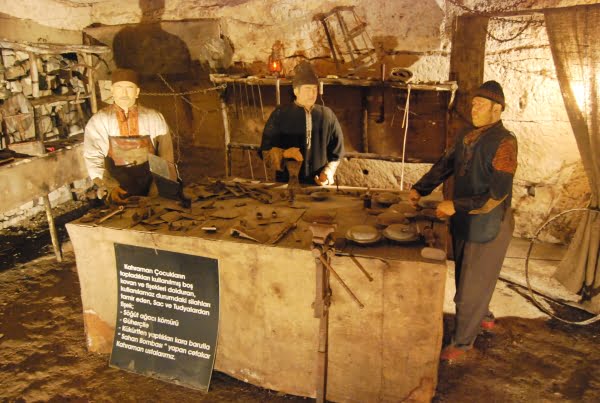 After touring the rooms, visitors head underground into caves where lifestyle models depict the role of people during fighting. The museum may not be everyone’s idea of a good time; however, a message lies beyond the wax models and treasured artefacts.

Growing up as a child, I was more concerned with the pop chart rankings of my favourite singer and ensuring I had the latest brand name trainers. I certainly never had to starve, pick up a gun for survival, or rummage among dead bodies to find used bullets for my dad to melt down.

The children of Gaziantep had to do all that over 80 years ago, yet in many other countries across the globe, there are children living today who will never know the joy of a simple childhood. They too, have to fight and starve, making the best of their struggle to survive. What a shame that in our age of technology and advanced education, we have still not found a way to confine all wars and famines to the walls of museums.

The museum is open from 8:30am to 5pm, but closed for lunch during 12 noon to 1pm. Not all displays within the museum have English translation so a guidebook is useful.