Beypazari is a popular weekend getaway for Turks, especially those from the big cities of Ankara or Istanbul. Before visiting, I had considered myself widely educated on places in Turkey, yet had never heard of Beypazari which is actually my shame because the region is widely respected for its traditional Ottoman houses.

I arrived in the town during the night so my first sight of a traditional Ottoman house was actually my strange but quaint hotel that had been converted. The original architecture had been restored, and the décor designed to carry on the theme.

However confusion set in, because it seemed my hotel room had no toilet or bathroom but what appeared to be part of the wardrobe was in fact the door to the bathroom. Crafty but clever and it transpired, this was a  typical feature of Ottoman houses in Beypazari.

Beypazari has a new town full of modern buildings but like any traditional getaway, staying in the old town is the better option if you are after history and culture.

So, the next morning, I viewed the area from the hill point of Hidirlik and then spent the next few days wandering around the narrow, cobbled streets with a local guide who showed me all the old Ottoman buildings still in existence.

They included the most popular place to eat in town called Degirmencioglu, the local bakery and the Turkish Hamam Museum based in an original Turkish bathhouse, dating from the 18th century.

The list goes on and roughly 3000 old Ottoman houses qualify Beypazari to be an open-air museum in its own right.

The Ottoman houses of Beypazari seemed remarkably similar to photos I had seen on the Internet of houses in Safranbolu, a famous Ottoman town in Turkey.

The similarity is easily explained because in 1884, a devastating fire ripped through the old town and damaged or completely flattened many properties. The Ottoman government sent architects from Safranbolu and they replicated the house plans. 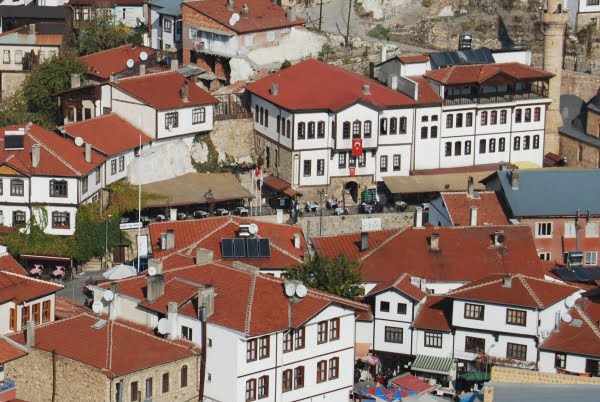 Traditional Architecture of an Ottoman House

My hotel had gorgeous, traditional décor but I was eager to learn how a family house would have been during those times and everything I wanted to know could be found in the Living Museum and also The Culture House of Beypazari.

The impressive setup of these museums shows how far Beypazari is determined to go, to present its traditions and cultural heritage to visitors. The mannequin dolls freaked me out but were kitted out in traditional Ottoman clothes and definitely added an atmospheric vibe to the tour.

Mostly the typical features of an Ottoman house are the exterior and in Beypazari, the bottom is rubble, while the upper levels are timber and plaster. Double doors led through to the ground floor of which the purpose would vary depending on the family. Using it as a storage area for livestock and animals was normal if this was the family’s trade or source of food.

Obviously the wealth of the family also dictated the structure of the house but if you want to read further, this PDF document has intense research on the variety of Ottoman houses throughout the whole of Turkey.

Where to see Ottoman Houses in Turkey

Take your pick because traditional Ottoman houses still exist in many areas of Turkey. Some are in a state of disrepair while others have been restored to their former glory.

The most famous is of course, the houses of Safranbolu in the Black sea region of Turkey. This is now a UNESCO World Heritage site. This article talks about their significance and should you plan to visit, also lists old Ottoman mansions that have been converted into hotels.

Also just recently added to the UNESCO World heritage list is the 700 year old village of Cumalikizik, on the outskirts of Bursa. Otherwise, head to Istanbul before the Ottoman houses there fall down.

According to June Taboroff, an American architectural historian, old houses found in the Suleymaniye and Zeyrek districts need a lot of repair and people are questioning whether the local districts do actually want to save these historical properties.

Alternatively if you are in the Antalya area, have a read of this brilliant article and then head to the old town  to find their marvelously preserved Ottoman houses that have been restored.

Well, Beypazari has sparked my interest in old Ottoman houses, so my bucket list for Turkey is now filled with suggestions in this article by Pat Yale called The Ottoman Houses of Western and Central Anatolia.