I sat down today and planned a tour in the Black Sea region of Turkey. It is on the north coast  and comprises of  many resorts and places to visit.It is my dream to travel this area. The problem is finding travel information is harder than it looks.

Thousands of blog posts have been written about Istanbul or Cappadocia but it seems the Black Sea region of Turkey is not popular. Even Wiki travel has blank spaces for where it recommends where to go, what to see and what to eat.

Anyway,  I have managed to put together my travel plans for a tour of the Black sea Region.  The rest of it, I will just have to figure it out as I go along.  My aim is to take three months to explore this region. Could be more, could be less. Who knows?

The Black Sea Region Of Turkey

1 – Akçakoca is a small town on the western coast of the Black sea.   This will be my starting point as it is just a bus ride away from Istanbul. My aim is to travel from the West to the East coast. This town  has a castle, one of the biggest mosques in the area and there is the old town to wander around and get some impressive photos of.

2 – I will then head inland to Safranbolu which is classed as a UNESCO World Heritage sight thanks to the Ottoman houses and architecture that still stands. This area seems to be more used to tourism then others as there are a wide choice of tours and hotels to choose from.

3 – Back up to the coast line to visit the seaside resort of Amasra. From what I can gather there is not much to do in this resort but I want to find out what all the fuss is about. Its normal population is 6,000 but in the summer seasons, this apparently triples when all the Turks from Istanbul and Ankara head there for their holidays. There must be some hidden secrets to keep them all going back.

4 – Next is the city of Sinop which apparently has views that makes any travel photographer imagine that they have won the lottery. It has some sightseeing tours such as a historical fortress and the oldest prison in Turkey. I have heard though the  nightlife is meant to be even more impressive. After all that traveling, I will need a drink or two!

5 – After I have finished experiencing the nightclubs in Sinop then it will be time to head to Samsun. This is the largest city on the Black Sea coast. There is the Archaeological  Museum to wander around, but I am mainly  interested in this place as the founder of Turkey called Mustafa Kemal Ataturk spent a lot of time here. There is a museum dedicated to him as well as a 13th century mosque and the Russian market. Not got a clue what the Russian market is about,  but dying to find out!

6 – After a big city then it is off to the town of Torul which is inland. Castles, dams, lakes and caves are a definite must see in this area. There is also a small village called Gümüstu which is stuck in time. Sounds like a fairytale land of dragons and dungeons.

7 – Trabzon is the next stop to see the Sümela Monastery. It is fourth century and located high up in the forests on the mountain. There is also an art gallery and a shopping mall. My husband no doubt will be popping along to see Trabzonspor Stadium. The football team is one of the well known ones in Turkish football. 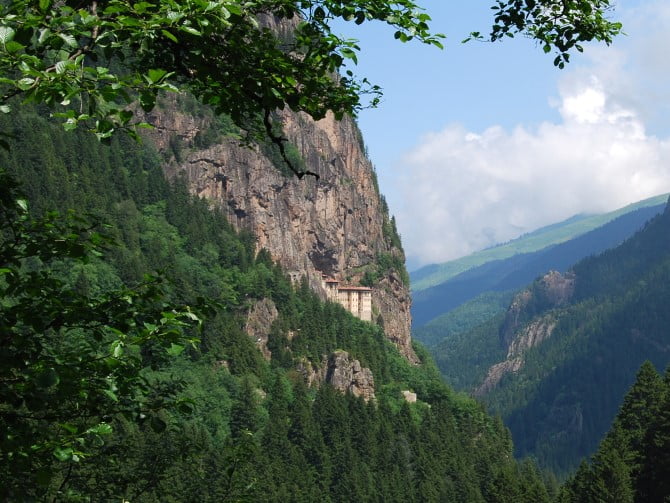 8 – Finally will be Rize which is known all through Turkey for its tea. One read of any travel website and it seems that there is nothing else to do in Rize. So, why do I want to go? I know many people from this town and I have heard a lot about it. Just because the travel websites don’t list things to do, it doesn’t mean that there is nothing there.  After all, it is a big city.

So that is my planned tour of the black sea region of Turkey. Of course, if any destination come up between the places above, I will be heading off to experience them.

In June of 2012, I completed a tour of the north east region of the Black Sea. You can see all my articles here.

Ottoman Intrigue at Topkapi Palace in Istanbul3K Total Shares
We use cookies on our website to give you the most relevant experience by remembering your preferences and repeat visits. By clicking “Accept”, you consent to the use of ALL the cookies.
Do not sell my personal information.
Cookie SettingsAccept
Manage consent