As I looked at the tour itinerary that I had signed up for, I saw the name “Sobesos Excavation Site” and was instantly intrigued. Having visited many off the beaten track places in Cappadocia, the fact that I’d never heard of this place meant one of three things.

A: It was recently discovered

B: It is nothing to boast about

C: I was not as well-travelled as I assumed

To my relief, although it had been discovered 13 years ago, excavation work has been slow and that explained the lack of information about it. So we arrived at Sobesos, where excavation work was on hold because of lack of funding. That is why we could visit.

This makes sense, since I’ve never heard of many excavation sites that allow tourists to tramp through while they are trying to uncover ancient artefacts, but neither did it make sense that there wasn’t even a small entrance fee. Surely that would contribute towards funding.

According to Turkey From The Inside, its old name is Sovese, and it was discovered in 2002, near the village of Sahinefendi. Some say by treasure hunters, others say by the farmer that owned the land.

Either way, when artefacts started appearing in the earth, the farmer reported it to the local authorities but apparently for many years, they didn’t want to know. Eventually, someone sat up and took notice and university students started the slow task of uncovering ancient buildings and artifacts in the earth

What is there to see at Sobesos?

In terms of size it is not huge but it has two extremely impressive structures to boast about; the Roman Bathhouse with an impressive and intact underfloor heating structure and a covered walkway leading visitors around the intricate mosaics.

In my opinion, the excellent condition of these mosaics easily matches those seen in the Roman Terrace houses of Ephesus. 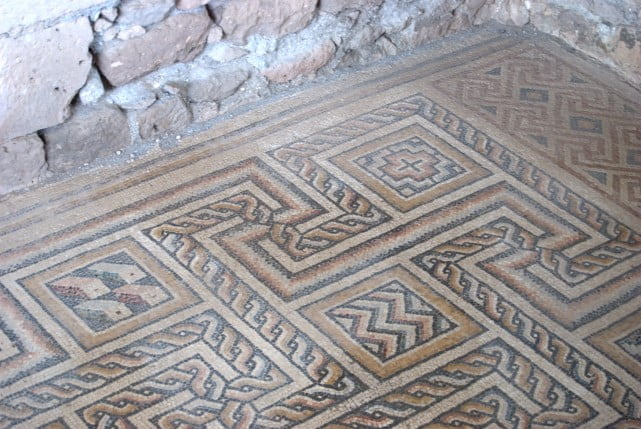 The Agora, Bouleuterion and Basilica structures have also been uncovered but to date that is it. I can only assume it has not been given top priority because from the east to the west of Turkey, there are thousands of ancient structures and buildings.

The country is just one big massive collection of artefacts portraying various civilizations throughout history. It is a story book, a pot of gold and a treasure chest of history.

Sobesos despite its small size is one part of this large collection and since the city walls have not yet been discovered, I look forward to learning about developments as they happen. This is one ancient site to keep an eye on.