Most of us have read the horror stories of people who have incurred massive telephone bills while holidaying abroad. The culprit for bills that have sometimes run into five figures is data roaming charges, a tariff that automatically kicks in when you use your cell phone overseas. Even if you avoid telephone calls, receiving text messages or voice mails, still uses data roaming charges but the biggest culprits and where most charges clock up is Internet access.

Every year, a story hits the UK papers of people that have received extraordinary and unbelievable bills for using their mobile phone to access the Internet in Turkey. Since Turkey is not part of the EU, the new EU tariffs that are cheaper and came into effect in July 2014 do not apply here.

The story of Shanon Mills in 2015 is a perfect example.

“A woman was stunned after returning home from a dream holiday – only to be handed a mobile phone bill for a whopping £21,819. Shannon Mills travelled to Turkey with her family for a summer break to relax but came home crippled with fear over the huge demand.”

What is Data Roaming?

To find out the answer to this question, I spoke to Ozgur Gen, a highly knowledgeable friend, who manages a mobile Wi-fi hotspot company in Istanbul called Rent ‘n Connect Turkey, and their dongle, and smart phone / tablet services are aimed at preventing data roaming charges.

“It is sending and receiving of data on a mobile network that your operator doesn’t own or have coverage of. The data is used to download music, watch films, listen to music and access most social media sites including Facebook and Instagram.”

In this report by the Telegraph, they say many people might not realise that they are running up data roaming charges. Quote…

“Many apps, especially those for news and social media, download the latest data in the background, even if they are not in active use. Instant messaging apps like WhatsApp and Facebook Messenger also use data.”

So how can you lower your data roaming charges in Turkey?

1: Most people who have been caught unaware by big bills, did not realise they were using data roaming so to be on the safe side, just switch it off when you are not accessing the Internet on your mobile phone. On my Samsung Note phone, I found it under the wireless and network options. 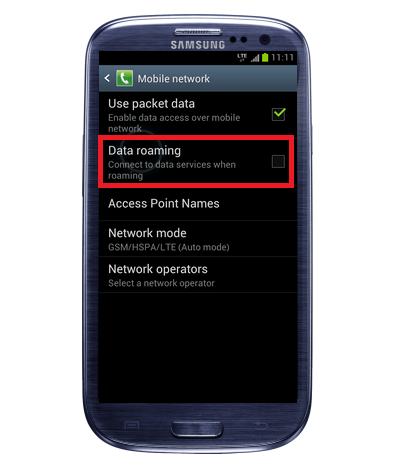 2: Most bars, restaurants, and hotels in Turkey offer free Wi-Fi access and you can get the password by asking a member of staff. The problem with this is that most are public networks and your confidential information is at risk, so if you use this option, avoid Internet banking, emails, and social sites that hold a lot of your personal information such as Facebook.

3: Another option is to buy a Turkish sim card from any of the major networks that are Turkcell, Vodafone, or Avea that has recently been bought out by Turk Telecom. At the time of purchasing, show them your passport, and the seller will pair the number of the sim card with your IMEI (International Mobile Equipment Identity) number of your phone.  One thing to  be aware of though is the registry requirement of mobile devices with the Turkish Telecom Authority. After a certain period international travellers cannot use devices with a Turkish sim card unless the mobile phone itself is registered, thus if it is your second trip with the same device, it may be blocked.

4: Purchase a data bundle from your home country, but once again check the usage because some people complain they are not enough and once you have used your limit, Internet access does not become available again until another bundle is purchased.

5: In Turkey, check out Rent ‘n Connect, who I previously mentioned above. Their services of renting a mobile hotspot or Mobile Hotspot with Digital Guide (7” Tablet)  – both providing unlimited 4G, speed mobile data are especially cost effective for families or large groups of friends, because up to 10 phones, tablets or PCs can connect to the one hotspot mobile Internet device.

When I tested their device back in 2014, the vast range of benefits including fast Internet service, and easy set-up procedures, highly impressed me. The device was delivered to my hotel reception and when leaving, I just popped it in a bag, and it was picked up by the courier service. This meant I didn’t have to change my travel plans or schedule, and the simplicity was a big plus for me.  Now they even deliver in person at the airports in Istanbul, and provide additional benefits such as good rates for transfers.

Ozgur Gen is also extremely excited because 4G Internet went live in Turkey on April the 1st and is slowly rolling out to all 81 provinces over the next 7 years. As soon as it is possible, Rent ‘n Connect Turkey will upgrade its service, and provide the 4G option as well so their customers can take advantage of the latest technology for a quicker and smoother Internet access. You can find out more about their products and the features here, and readers of Turkish travel blog should quote TP2016NS, at the time of booking to receive discount.