People who are unfamiliar with the country of Turkey assume the national drink is coffee, but in fact, tea is the inseparable drink of Turkish culture. Women, family, and friends often meet in tea gardens, while men flock to the male dominated teahouses that are a focal point of most villages and towns.

Harking back to the old days of face to face interaction, indulging in the daily ritual of tea drinking in Turkey means you don’t need phone credit, Facebook Time or otherwise to socialise. It is still a personal experience and in most cases of strangers, the beginning of a beautiful friendship. It even has its own proverb connecting it with love.

How to Drink Turkish Tea

Called Cay in Turkish, small tulip shaped glasses sitting on round saucers are used to drink the tea. Turks never add milk but generally do insist on two cubes of sugar or more. Then it is a simple case of sipping it slowly to flavour the taste.

More than likely, Turkish friends will serve you tea when you visit them in their home. They may also invite you to meet them in tea gardens that are family destinations. Teahouses, generally located in the village or town centre are male-dominated environments, and it would be extremely unusual to see a female in one of those.

As well as being a social experience, Turkish tea has many health benefits as well. Studies in the Netherlands showed that black tea helps to regulate blood vessels and the heart, therefore, leading to a lesser chance of a stroke or heart attack. The flavonoids in black tea also keep cholesterol down, help to stabilise our metabolism and lead to a reduced risk of diabetes. 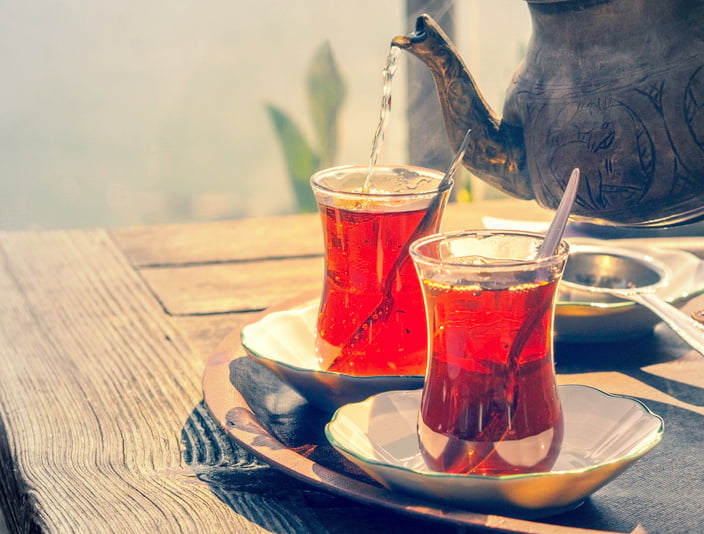 How to Make Turkish Tea

Traditionally, a steel, two-tire pot called a caydanlik is used to make Turkish tea. Take the larger bottom pot and boil water in it on the stove. Put 2 tablespoons of tea leaves into the top pot, and fill it with boiling water from the lower one. Sit it on top of the bottom pan for approximately 10 minutes.

When you are ready to serve, fill a small tulip shaped glass either a quarter or a third of the way up, with the tea mixture from the top half of the caydanlik. Top up with clear water from the bottom pot. You can alter this mixture according to your taste of whether you like strong (demli) or weak (açik) tea. Add cubes of sugar to taste, then stir, and drink.

The most widely used brand of tea in Turkey is Caykur from the northeast region of Rize. This province, known as the tea capital of the country has a mild climate suiting the green mountainsides covered with tea plantations. As the main trade of the region, estimates say every second adult works in the tea industry of Rize. Caykur produce many variations of tea although Rize Turist is the most widely sold. If you are in that region, visit the Caykur tea gardens for a refreshing brew and fantastic view over the city and its tea plantations.

Other Types of Turkish Tea

Oralet is a fruit tea with flavours such as orange, apple, lemon, and cherry. Rather than using traditional tea leaves, the mixture consistency looks like sprinkles used for decorating cakes. It has an unusual bright colour, a fruity taste and generally thanks to its sweetness, does not need additional sugar. Typically sold at the local weekly markets, this tea type appeals to tourists more than Turks.

Turkish herbal tea is also available but at this point, it is worth mentioning Apple tea. It has garnered a reputation in the tourism industry as the ideal drink to offer travellers, especially while you are shopping. The truth is that Turks seldom drink it. According to them, the black, sweet variety is the only way to drink tea like a Turk!