Clinging to the side of a mountain in the green and lush area of Maçka  is Sumela monastery, which was built in the fourth century.  I had joined a tour and traveled from the nearby city of Trabzon to visit the iconic building. 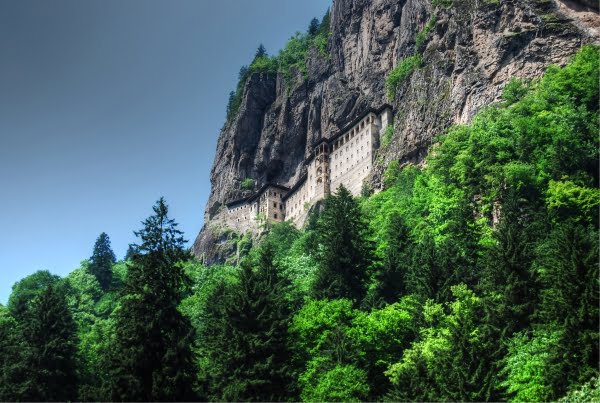 We drove as far as possible and walked the last two hundred metres uphill. Most of it was uneven ground, sometimes narrow and large tree roots protruding out of the ground were an accident waiting to happen.

I reached the entrance, out of breath but my first view of the inside courtyard, confirmed that this was a worthwhile visit. A long flight of steps led down to the main courtyard, passing living quarters on the way.

From there, the kitchens and church are the last places to explore. 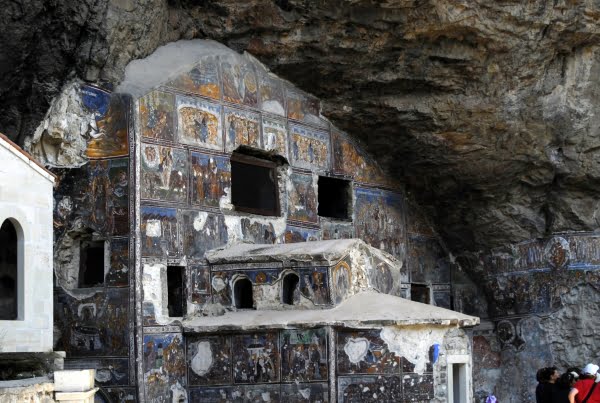 Furniture and personal possessions are not on display as the monastery was emptied in 1923.  A lack of signs or a personal guide also means that at times, it is impossible to realise where you are stood and what you are looking at. The main attraction is the unique location and view. 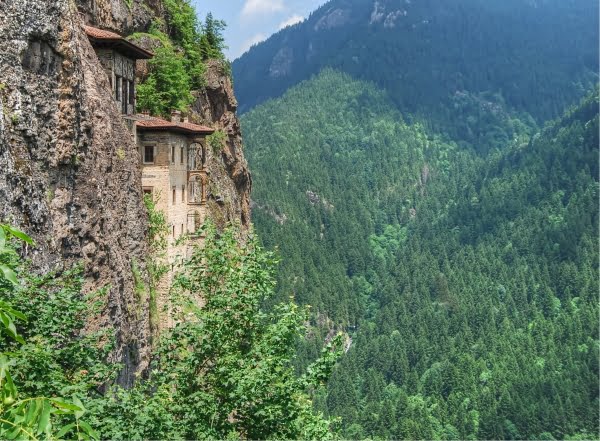 Why was Sumela Monastery built in this peculiar place?

Traditionally, monasteries were always built on hills so they would be looking down on the local community. The people who built Sumela took this concept to another level by building as high as they did.

The story of why the monastery is in this peculiar location will vary depending on whom you speak to. The most popular explanation, involves a belief in miracles if you are to accept it as the truth.

It starts with two priests and a statue.

The legend talks about two priests who found an statue of the Virgin Mary in a cave on this mountain. The dark color of the statue led the priests to believe they had discovered a Black Madonna typically associated with miracles.

They believed Saint Luke had made the Black Madonna and angels carried it to the mountain.

They said it was a sign from the Virgin Mary that they should build their monastery in that spot.

Could rumours that the priests made up the story about the Black Madonna to gain income for their monastery be true?

Either way, the monastery functioned peacefully for hundreds of years. The Ottoman ruler, Sultan Mehmet the second, gave it protected status, special rights and privileges. It also continued to receive donations because of the Black Madonna statue.

The Turkish war of independence put an end to daily life in the monastery. In 1923, the monastery was abandoned and many items were secretly smuggled to a new monastery in Greece. It is believed that the Black Madonna was one of them. 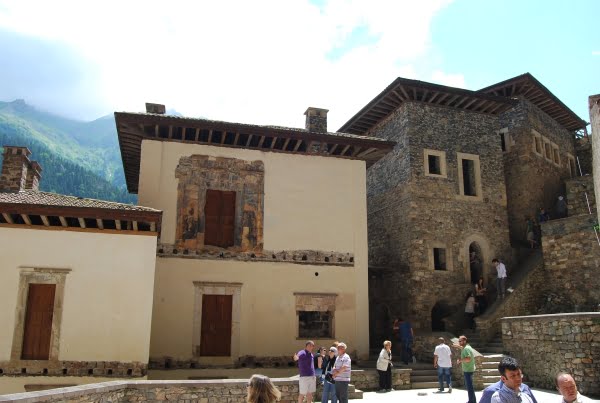 For many years, the monastery lay empty, visited only by soldiers and passersby. The frescoes show signs of damage from this time. Rumours also suggest that American and Russian soldiers based in the area, in the early 1900s, chipped off parts of the frescoes for souvenirs to take home. 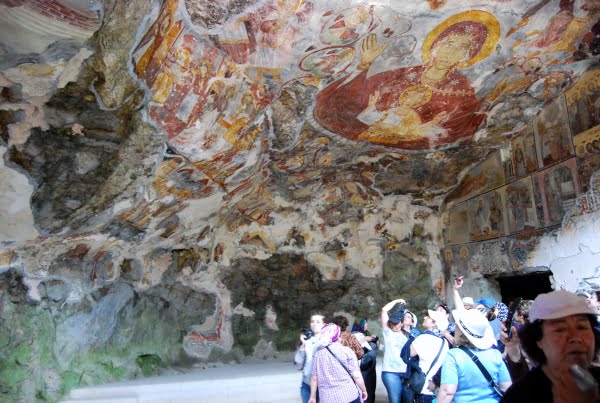 The most impressive display is on the ceiling and walls inside the church, showing various scenes from the Bible and figures of Christianity.

You can take photographs if you do not use a flash. Ignore this rule and guides will have no hesitation at shouting at you in front of everyone. 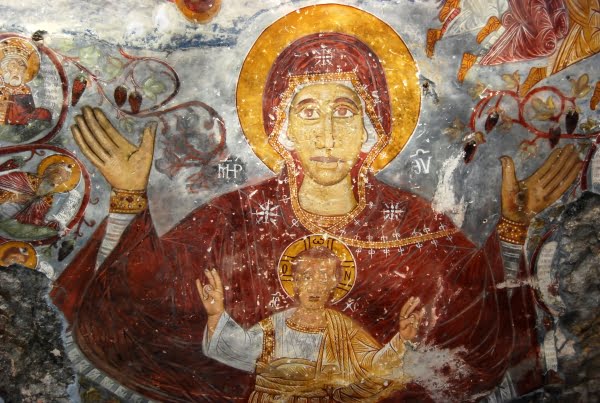 Is it bad to say that while I normally frown at graffiti on ancient drawings, the engravings of peoples name and years actually fascinated me? 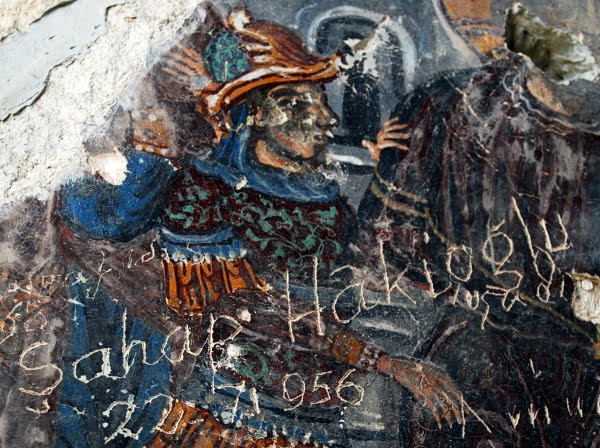 Next to the church is one spot that is always wet, because of water dripping constantly from the rock face.

When the monastery first opened, people believed that if you stood on the spot and three drops of water fell on your head in concession, then good luck and health would come your way.

The queue used to be long as sick people travelled from far afield to be healed. Thankfully, that rumour has been laid to rest! 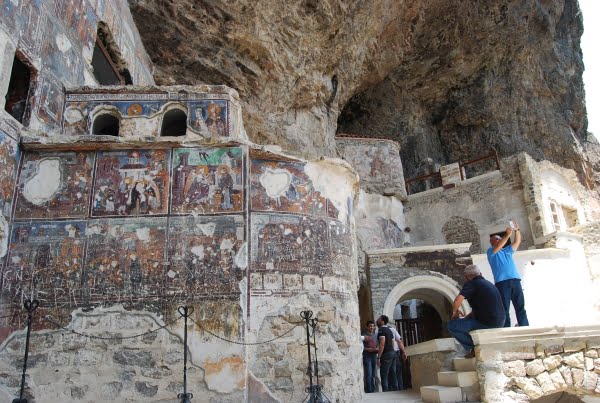 I cannot compare Sumela monastery to any other historic site in Turkey.

The renovation work makes it hard to image this building at the time of its construction in 386AD, but with a little bit of imagination, the services of a guide and a well-written book, you can appreciate it. 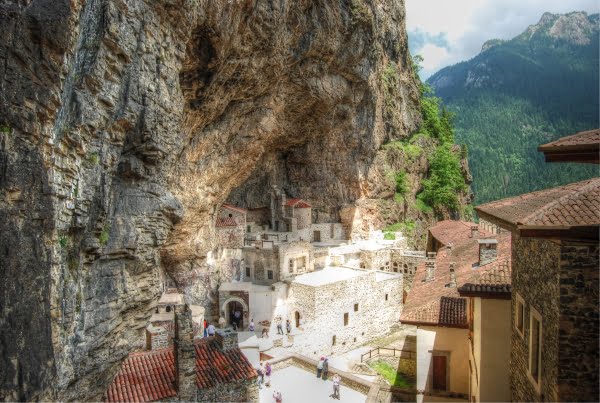 Most of the tour agencies in the city of Trabzon have cheap tours on offer that depart every day.

One morning is enough to explore Sumela monastery fully. Take a bottle of water, as you will need it on the walk up and there are no cafeterias at the top.

A restaurant at the bottom of the hill serves food and drinks which is ideal if you want to spend a full day exploring the area. 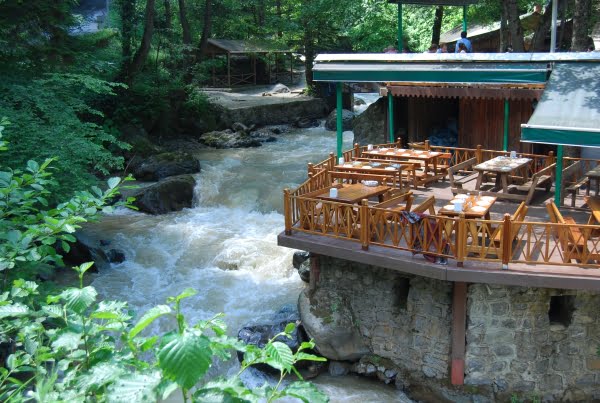 On the way down, there is a grumpy old man, who never smiles but he does play traditional Black sea music in return for a couple of coins. 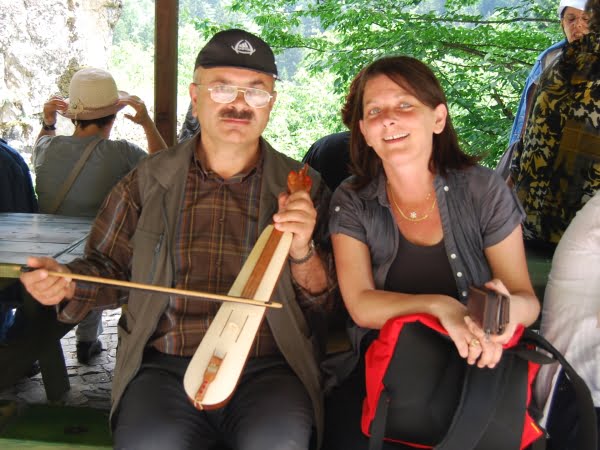 Every year, on August 15, the monastery closes its door to tourism and only a select few can enter for a special religious service.

Readers Question : Have you been to Sumela? If not, would you put it on your list of places to visit? 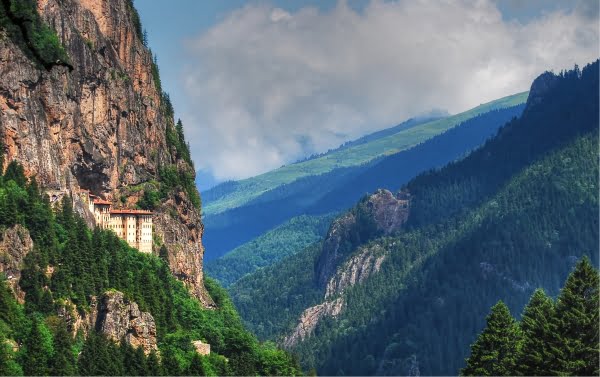