The amazing Sufi poet called Rumi once said that “Love cannot be described. It must be tasted”. He said these words over 700 years ago, yet people still spend time and energy searching for the perfect definition of love. Better questions to ask would be…

Do you believe that simple sentences or actions can evoke overwhelming emotions?

Do you believe that a greater understanding of other cultures and beliefs is a necessity?

Do you believe that by consciously improving our knowledge, we can achieve inner peace?

My answers to all the above questions are “yes” and that is, why I was interested to find out more about the Sufi Mystic experience in Turkey introduced to me by popular blogger Jools Stone. The ten day event is organized by the same people who run the “Monk for a Month” program in Thailand.

Everyone attending a Sufi Mystic experience will be taking a conscious action to improve their knowledge, learn about another branch of  Turkish culture and to further understand the complex emotions that the human body so often experiences.

Before I go on to describe what the Ten Day Sufi Mystic experience is, I am going to assume that some people are not aware of Sufism and the great words of the poet Rumi so here is a quick intro…

Sufism is existent in several continents. It is the belief that a person does not have to wait for the afterlife to be closer to god. They can achieve a state of inner peace, kindness and generosity in order to bring them closer to god in this life. 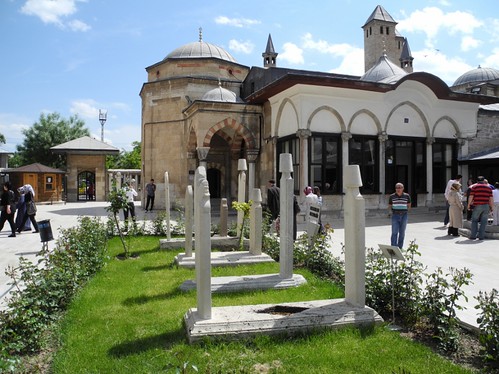 (Mosque and Museum of Whirling dervishes in Konya – Photo from Flickr)

Picture of Rumi Portrayed in a Book- Image by Georges Jansoone

In present days, he has achieved celebrity status as millions of people know him by his first name only. He is classed as one of the best-selling poets of our times, which is quite an honor considering he lived in the 13th century.

To quote UNESCO “Rumi is one of the great humanists, philosophers and poets who belong to humanity in its entirety”

Famous quotes by Rumi include…

“People of the world don’t look at themselves, and so they blame one another”

“Remember, the entrance door to the sanctuary is inside you”

“Your task is not to seek for love, but merely to seek and find all the barriers within yourself that you have built against it”

After the death of Rumi, followers in Turkey formed the Mevlani branch of Sufism otherwise known as the whirling dervishes of Konya.

The performance in which they whirl around to achieve inner peace are popular with tourists however very few people get to learn of their beliefs and origins. This is all set to change with the Sufi Mystic experience

The Whirling Dervishes of Konya

The Sufi Mystic Experience – Interview with creator of the program, Irish-Australian Ben Bowler

1 – Hi Ben. Tell me more about yourself and why you created the Sufi Mystic Experience

Well, I am the creator of the World Weavers organization which is a cultural and social enterprise active in Europe and Asia. Our motto is “One World One Family”.

We are most well-known throughout Asia for our renowned ‘Monk for a Month’ temple-stay, which is a Buddhist immersion program in Thailand that has been active since 2008.

On January the 22nd 2012, we will be running the first Sufi mystic experience in Turkey which will be based in the locations of Istanbul and Konya. We are nearly fully booked up, so are actively organizing other dates further in the year.

2 – Tell me more about the Sufi Mystical experience. How will people be introduced to the works of Rumi and Sufism?

The purpose of the Sufi Mystic program is to offer people an authentic experience of Sufi mysticism as practiced by devotees across the Anatolia region of Turkey.

“It isn’t about religious conversion but rather an aim to foster greater understanding between faiths and building those human bridges of friendship and sympathetic affection which can lead us to peace. It will be a personal spiritual experience, inspired by Rumi and guided by modern day Sufi masters”

3 – What is the general itinerary for the experience?

Guests will live among local Sufi Muslims and stay at a historical 400-year-old Sufi lodge. They will join church and synagogue services, watch the whirling dervishes in action and also visit the tomb of the world-famous poet Rumi. To break up the itinerary, we have also included sightseeing tours of famous historical attractions such as the Topkapi palace and Blue Mosque in Istanbul.

4 – How can people find out more about the Sufi Mystic Experience and also your organization?

Yes Natalie. Watch this space for the Christian and Sikh cultural programs!

All Cultural Programs by The Blood Foundation Organisation

Monk For a Month – Ever thought about exploring Buddhism?

Muslim for a month – Delving into the world of Islam