I was quite pleased to come across the St. Anthony of Padua church while in Istanbul. I had seen it mentioned in guidebooks but did not plan on visiting, until I found myself right outside. Located on Istiklal Avenue, behind a large set of iron gates, it is an impressive building dating back to 1906. It also has the status of being the largest, fully functioning church in Istanbul.

The sudden decision to enter also led my ignorance to be put on display. I am very embarrassed to admit that I walked up to a statue and asked my two friends “who’s this bloke then?” Here is a picture of the statue. In my defence, the resemblance is glaring obvious now, but it was not at the time….

After a lot of tutting and eyebrows rising in surprise, I was reliably informed that it was the Pope. Pope John XXIII to be exact and the significance to me was zilch, because I think all the popes look the same anyway. I was ready to discard this information as useless however; it later transpired that to the people, he was known as the “The Turkish pope.”

The Turkish pope preached at this church for ten years leading him to develop a  love for Istanbul and the country of Turkey. He also mastered the extremely difficult task of being able to speak fluent Turkish. I hold my head in shame, as my level of Turkish, often makes people think I grew up in the gutter.

Described as Venetian Neo-Gothic  architecture, it is hard not to be impressed when you first walk in. 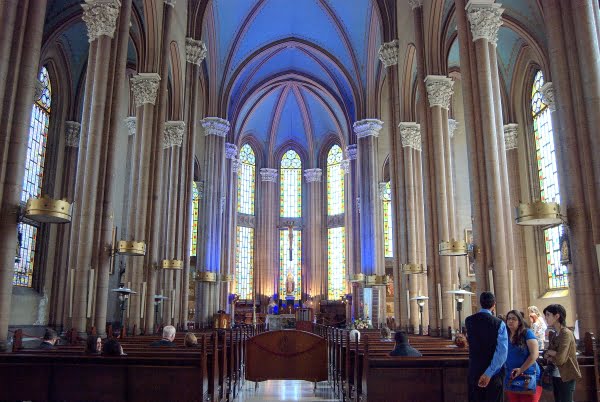 It transpires  that  the church along with others was built for 40,000 Roman Catholics who were living in Istanbul at the turn of the century. It was a replacement of the original St. Anthony of Padua Church, which had been demolished previously.

Out of respect for people praying, I was very hesitant to walk fully around the church. Also, it was great to view the interior, but the silence, religious works of art and life like statues made me feel uncomfortable. I have never felt at ease, in any religious place of worship and do not know why. I strongly suspect that in my past life, I was headed on a self-destructive path to the dark kingdom down below.

I do have one complaint though. As I walked out of the door, there was a tacky souvenir stand, selling miniature statues of Mary and Jesus.

Seriously, do people buy this stuff?