Every year around Christmas time, millions of parents across the world take part in the biggest deception concerning Santa Claus.  It starts in the early years of a child’s life when the parents promise an abundance of presents from Santa for good behavior.

They tell stories of the North Pole, the fat man who lives there and the elves who  make presents of all shapes and sizes. Some parents even take children to Lapland and the misguided infants spend the first years of their life believing in flying reindeer.

In the later years, parents mistakenly confess to their children that Santa Claus was not real and he is just a fun part of Christmas. The sad fact is Santa may not be alive and kicking but he was a real person.

He did also drop presents down chimneys and his biography actually starts in the country of Turkey, not the North Pole. I recently got chance to visit the town where his reputation was made but figured a bit of background history was needed to explain the story.

Six Facts about Santa Claus and Turkey that You Never Knew

1 – Santa Claus was born in the town of Patara on the South West coast of Turkey between the years of 260 and 280AD.  Technically, the republic of Turkey was not formed until 1923 so if you want to split hairs, Patara at that time was under Lycian rule.

2 – The true name of Santa Claus was Nicholas and in adult life, he became the bishop of Myra which was a town further up the coast from Patara. It is now called Demre.

3 – When Nicholas’s parents died, they left him a lot of money and made him a wealthy man. He wanted to help people who were poor but he wanted to do it in secret so the agile bishop used to climb on the roofs of people’s houses and drop coins down the chimney. One day, a citizen caught him in the act and his good nature was revealed to the town.

4 – Upon his death, a memorial was erected in the town but it would be a number of years before he gained the holiest of titles and that was as Saint Nicholas. He also became the patron saint of sailors but more specifically of children as he was remembered for giving them nuts, fruit and sweets for good behavior. Bribery was alive and kicking even back then.

5 – December the 6th become associated with the feast of St Nicholas and in later years, a bishop declared December the 25th as the birth of Jesus. Over time, the two celebrations began to fuse together and that was the first connection between Santa Claus, Saint Nicholas and Christmas day traditions.

6 –In the late 1800’s drawings appeared of St Nicholas aka Santa Claus with a beard, pipe and a large belly. The  transformation of a humble saint called Nicholas to a fat, jolly man who feasts on mince pies and gets stuck in chimneys,  had began.  (God knows how the North pole, loyal elves and flying reindeer came about) 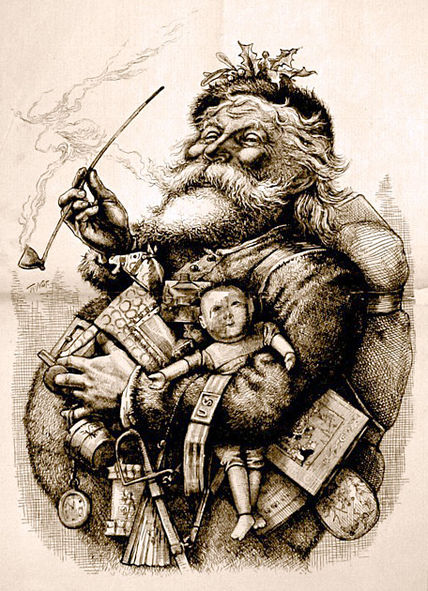 Over the years, the true story of Santa Claus has become hidden in the shadows, known only by those who are religious or those who decide to trace back the history of St Nicholas or Christmas day traditions.

On my recent tour of the Lycian way in Turkey, I visited the church of St Nicholas where I got a wonderful insight into the humble beginnings of the man who would later be known as Santa Claus.

Located in the town of Demre (far away from the North pole!), the church is open every day and on the 6th of December, special celebrations are held for the day dedicated to Saint Nicholas. It is also the church which holds his original sarcophagus although his bones were stolen in the 10thcentury by Italian sailors and they are now encrypted in a church on the south east coast of Italy.

Special Notes: When you enter the church, it is wise to be respectful even if you are not religious as there are many queuing up to touch the sarcophagus of St Nicholas and also hold pray in the main hall

Request to all parents: Ok, I get it!  The commercialized story of Santa Claus, reindeer, elves and the North Pole is more convincing when trying to get naughty children to behave. However when they get older,instead of making a confession that you have been lying to them for the first years of their life, tell them about saint Nicholas, his origins and how his good deeds earned him, a place in the heart of children all across the world.