The Greek island of Meis is colourful, quiet and full of bizarre locals. The one reason why I went there was simply because I was not forced into doing it.

You see, when I first came to Turkey, visa runs across to any Greek island were a necessity. Many expats did it and still do it now. At first, it was a novelty, but after a while, it became boring and I constantly thought about better things that I wanted to do with my time.

Eventually I ended up on a residency visa and then on Turkish citizenship so there was no need to worry about visas anymore.  This was when the idea of day hoping across to a Greek island did not seem like a chore.

It is strange that when you do not have to do something, it becomes more attractive.

My previous hatred of compulsory visa runs has disappeared and now I want to see all the Greek islands that have ferry access from Turkey.

Arriving on the Greek Island of Meis

While I was in Kas on my solo tour, I could see the island of Meis from my hotel rooftop, as it is only two miles away.  I decided there was no time like the present so I booked myself a return ticket. The ferry departs from the harbour at 10am and it is a quick trip across the water. 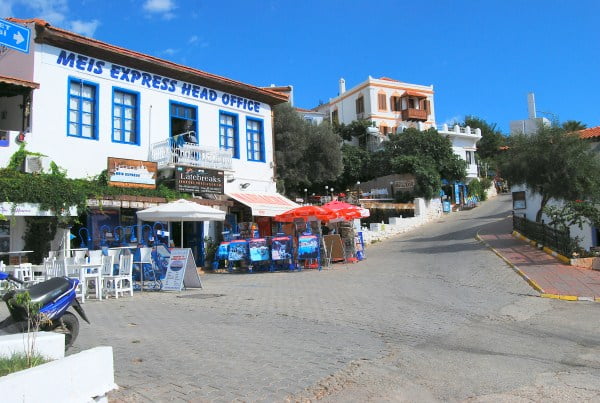 Arriving in Meis on the ferry, it was blaring obvious that the island is awash in colour.

Stupid people who have no concept of health and safety paint houses in bright colours.

I decided the best way to get to know the island was to speak to the locals. They turned out to be a tourism board’s worst nightmare.

“Meis is good if you like drinking, eating, sleeping and doing nothing else,” said the bank teller who was very angry about his compulsory transfer from Rhodes. “After just a couple of days, you can become very bored”

“Yes, there is a castle but it is not worth seeing,” said the boat captain who was obviously getting ready for his afternoon siesta.

In total, there are about 350 people living permanently on the island but it will swell up in the summer time to around 1000.

So be warned that the island is not for everyone and think twice if you plan on an overnight stay.

I spent a lot of time exploring side streets and sitting in cafes eating waffles and drinking frappes. My favourite moment though was the Blue cave. I wrote about this previously and cannot recommend it enough.

While it is 25 metres high, the entrance is only a metre but once you sail into it, the light reflecting off the water is amazing. If you want to go to the cave, when you come off the ferry, ask for Kostos.

He is terrible at steering boats and has no life jackets but he speaks very good English.

At the end of the day, I was actually glad to leave the Greek island of Meis. It is colourful and the locals are friendly, even though they have bizarre ways. It is just that the laidback pace is too much for me. I need some vibes and excitement. Maybe when I retire, I will return

Would I recommend it for an overnight stay? No.

Would I recommend it for a day trip? Yes, if you visit the Blue Cave

Ps – Do not forget to order a plate of delicious fresh calamari from the harbour restaurants.

Readers Questions : Visa runs, love them or hate them? Have you been to Meis or any of the Greek Islands?