When Turkey proudly burst onto the mainstream travel scene at the turn of the century, travel agents lured many people to the country by highlighting the many miles of gorgeous beaches. This is no surprise because three broad stretches of coastline including the Aegean, Mediterranean, and the lesser-known Black-Sea Shores, surround Turkey.

Beautiful beaches are not media hype either because Turkey is third in the world for its number of official blue flag beaches. Following, closely behind Greece and Spain, 400 blue flag beaches covering roughly 7,200 kilometers of gorgeous seashores, make the country an attractive beach destination.

A few locations, renowned for their sandy beaches like the mainstream holiday resorts of  Antalya, Marmaris, and Bodrum enjoyed the boost in popularity while other coastal resorts remain off the beaten track and a hidden secret. So, let’s look at where the best sandy spots in Turkey are.

Patara humbly wears the crown of being Turkey’s longest beach. Stretching for 18 kilometres, it also plays host to endangered sea turtles laying their eggs in the sand, so some areas are fenced off at night-time during certain times of the year. The village and its rustic pensions are a short walk away, and apart from the Lycian historical ruins; the area is quiet and ideal for anyone with plans to just relax, sunbathe, and swim. 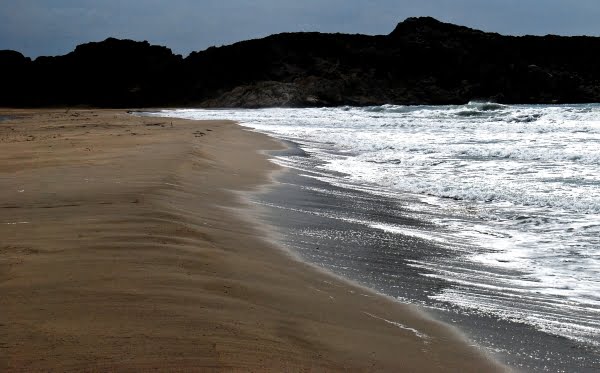 This little man-made holiday resort of the Fethiye Peninsula sits on the edge of the famous Blue Lagoon and is my first choice for a beach holiday. The sandy stretch of coastline is the idyllic postcard setting whether you use the main town beach or pay an entrance fee to use the pedalos and sun loungers at the Lagoon.

From the main beach, a water taxi also heads across to the Bohemian Butterfly Valley. Although it is a pebbly beach, snorkelers and swimmers enjoy the seashore while the beautiful green valley backing is a lovely short walk to break up your day sunbathing. Another choice of beach holiday destinations in the Fethiye region is Calis beach. I haven’t been there, but it is a popular choice for British holidaymakers.

Yalikavak on the Bodrum Peninsula

Yalikavak is one of my favourite holiday resorts in Turkey. Sitting on the Bodrum peninsula, the whole region is popular because it has one of the biggest ratios of holiday villas in Turkey, as well as many small bays and coves to couple up with an authentic Aegean nightlife scene. Restaurants and bars back the long beach in the centre of Yalikavak, and the amenities of loungers and umbrellas are plentiful. If you tire of the main beach, so many other smaller ones are a short bus ride away.

As the second most popular holiday destination in Turkey, Antalya also has a lively nightlife scene making the city centre district ideal for anyone who wants to sunbathe during the day and party at night.

A short walk away from the old part of Antalya (Kaleici) is Konyaalti beach with 2-kilometres of sun loungers for hire and a long strip of cafes behind it. A sandier beach though is Lara, 6 miles east of the old town. All-inclusive hotels dominate this area and bargain cheap holidays in this destination are easy to find. A smaller alternative to both of the main city centres beaches is Mermerli, close to the harbor district.

Away from the crowds, Olympos and Cirali, two rustic and off the beaten track resorts share a 3-kilometer beach that is sandy in parts and pebbly in others. Budget and young backpackers tend to prefer Olympos for its themed treehouse hotels, but I chose instead, to upgrade and stay at the Canada Hotel in Cirali, who also organized trips to nearby Phaselis, famed for its sandy beach, and ancient city ruins.

If you select the Olympos side of the beach, take a cool box for refreshments because there aren’t any restaurants near that stretch of beach. To break up your beach time, visit the ruins and at night, walk up to the burning flames of Chimaera.

Kusadasi, a major cruise ship destination on the Aegean, has many beaches of which the most famous is Ladies Beach. Backed by hotels, restaurants, and bars, everything is within close distance and for families with teenagers, water sports such as jet skis and banana boats dominate a small section of the beach.

Two urban legends exist about how the beach got its name. The first is that when Kusadasi was a fishing village, wives used to wait on the beach for their husbands to return from sea. The second is that, in days gone by, women used to inherit the land by the sea because it was considered worthless while men got the land further away because it could be farmed on. Little did people know that beach holidays would become the next biggest trend and all those ladies with worthless land were suddenly very wealthy.

If you don’t choose the all-inclusive hotels connected with the beach, you need a car or public transport to get to Pamuk beach because it is quite a distance away from the two accommodation centers of Kusadasi and Selcuk. I didn’t like this beach because of the lack of restaurants and amenities, but if you are prepared to rough it and pack a cool box, it is spacious and sandy. On windy days, though, the rough waves mean it is more of an energetic swim than a relaxing one.

Altinkum’s name translates to golden sands, and this is reflected by its large selection of beaches. The holiday resort, nicknamed little Britain because of the large British expat community has three beaches in the central town centre. Uniquely (sarcasm) named first, second and third, a scuba diving centre dominates the third beach, making this an excellent choice for families with teenagers or groups of friends. 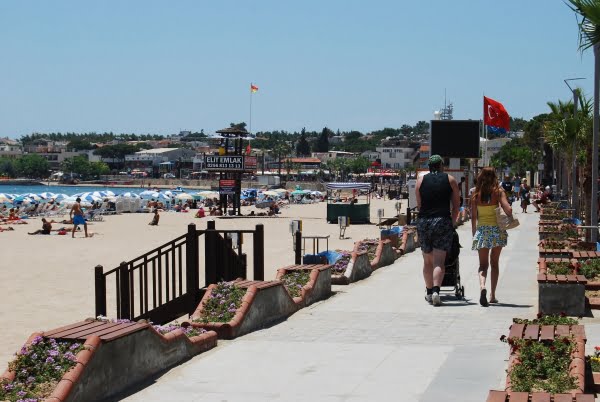 The first time I visited Turkey was a 2-week beach holiday in Marmaris, and I loved the long sandy beach stretching in front of the main city centre. Bars and restaurants back individual parts, and we had a fantastic time of sunbathing on the beach during the day and partying at night. Sitting next to Marmaris is the smaller holiday resort of Icmeler with its semi-circle beach and a large choice of water sports. Both are good choices for a beach holiday destination in Turkey.