Turks are very resourceful when it comes to food. They waste nothing and everything is used in one form or another.

Reading “brain soup” on my local takeaway menu no longer makes me burst into giggles and my favourite dish in Urfa was Dalak, which is lambs spleen.

I am also still trying to figure out whether the mother-in-law was joking, when at Ramadan after cutting up the sheep, she wanted to keep its bollocks. I figure that maybe it is one of those things in life, that I will not benefit from knowing.

Anyway, on my latest travels, I visited the region of Beypazari near Ankara and was  introduced to a dish that I had never heard of before. It is called Aguz and it was given to me by a local farmer and his wife.

Having never been a farmer or kept a cow as a pet, I am a complete novice when it comes to their pregnancy rituals and the ingredient that they produce at birthing time, which is then used to make Aguz.

I asked hubby for more information on the dish and he had never heard of it so I  delved into the world of livestock farming and the internet to research exactly what it was.

The information on the internet is limited, so I am assuming Aguz is a local delicacy in Turkey or a dish that is restricted since it relies on the cow giving birth.

The best explanation that I could find comes from a website that goes in-depth about Turkish cuisine.

They mention it as a dish, which started during the Ottoman reign, and it is prepared in the following way

“Aguz: This is made from colostrum, milked from cows that have just calved, for three days. The colostrums is strained, lightly salted, and put into a vessel which is covered and lowered into boiling water, where it thickens.

It is checked several times, and when it has thickened sufficiently, it is removed from the heat and put in a cool place to stand overnight. This solidified milk product is called aguz. It is eaten with sugar.” 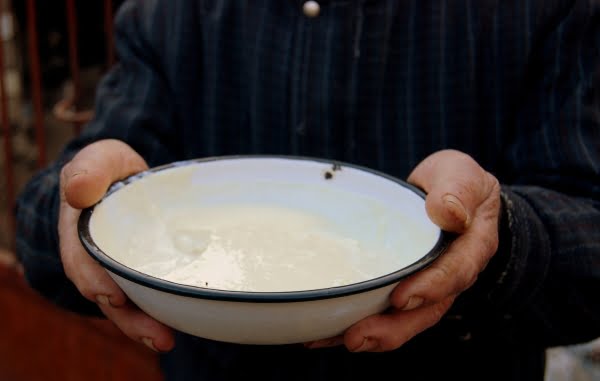 The use of Cows Colostrum

Before antibiotics were invented, colostrum was used to fight infection and build up immunity.  Some athletes also use colostrum to boost performance. When it comes to nutrients, colostrum is meant to be the best source that you will ever find.

There has been some claims in the past that colostrum should not be used to make dishes such as Aguz because it is not fit for human consumption, but there are people that deny this claim and I doubt that locals in the village would take any notice of these expert claims, instead relying on age old traditions.

Yes, I did. The dish tasted like rice pudding without the rice. It was plain on my palette however; I was advised that sugar is normally sprinkled on the top.

It was white and had a smooth consistency. I was urged to taste it before being informed as to its source, but would have eaten it anyway as I always believe in trying something at least once.

I am not sure that I will eat it again because in 11 years in Turkey, I had never heard of it before and maybe will never come across it again.

Though I will always remember the circumstances that led me to taste Aguz for the first time.

We were in the village of Dudas in the Beypazari region and gave one of the local farmers a lift to his house.

Half an hour later, we drove back down that road and found that  farmer standing outside his gate with a bowl of Aguz and three spoons.

He had been waiting for us and was eager to share his food. Turkish people never fail to delight me with their hospitality.

That day along with other events in my recent travel plans, have made me realise that my travel plans for Turkey are far from over.

Readers question : Have you heard before about Aguz or eating the colostrum from a cow?

Further Reading : Cooking with colostrum – scroll down to the disapproving readers comments at the bottom

“A friend of mine from Turkey recounts that her mother always obtained colostrum in the spring–often at great trouble and expense–from a farmer in the countryside. She then lined up all the children and gave them a cupful of this tonic to drink. The immediate result, says my friend, was that they all fell asleep. The colostrum was said to help keep them healthy throughout the year.”